Poet of the Week - Wallace Stevens 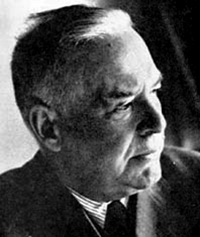 Wallace Stevens was born in Reading, Pennsylvania in 1879. Though he longed to be a professional writer, he ended up practicing law until 1916. Stevens nevertheless began publishing under the pseudonym “Peter Parasol” in 1914 and although he would eventually spend his entire life behind an office desk, he continued publishing work, including Harmonium (1923), Ideas of Order (1935), The Man With the Blue Guitar (1937), Notes Towards a Supreme Fiction (1942), a collection of essays on poetry, The Necessary Angel (1951), and Collected Poems (1954). He is one of the most important poets of the 20th century and his whimsical, visceral language still comes across as fresh today.

One must have a mind of winter

To regard the frost and the boughs

Of the pine-trees crusted with snow;

And have been cold a long time

To behold the junipers shagged with ice,

The spruces rough in the distant glitter

Of the January sun; and not to think

Of any misery in the sound of the wind,

In the sound of a few leaves,

Which is the sound of the land

Full of the same wind

That is blowing in the same bare place

For the listener, who listens in the snow,

And, nothing himself, beholds