Fifty years ago today, Neil Armstrong, Buzz Aldrin, and Michael Collins first set off into space to explore the surface of the Moon. Their mission, Apollo 11, was the culmination of decades of determined research and experimentation in rocketry, computing, aeronautics, astronomy, telecommunications, and other high-minded fields. Though the Apollo program was born out of the Cold War rivalry between the United States and the Soviet Union (many of the same rockets used to lift astronauts into space were first designed to carry doomsday weapons), the outrageous fact that human beings have existed on another celestial body transcends any one nation or any earthly conflict. As is written on the steel plaque that Armstrong and Aldrin left behind in July 1969: "We came in peace for all mankind."

In 1972, we left the Moon and never went back; only the future will reveal whether Apollo 11 was the first step on our path into the universe or just a historical oddity for an Earth-bound species. But for now, we can use the memory as a reminder that humans are capable of greater things than the struggle for daily life. In that spirit, here are a few works of art in the Free Library’s collection that use cosmic settings to expand our horizons. 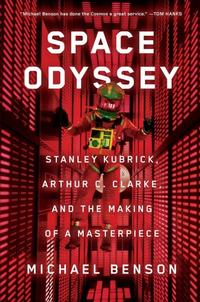 Over the past decade, Hollywood has seen a small fad for "realistic"–seeming science fiction: movies such as Moon (2009), Gravity (2013), Interstellar (2014), and The Martian (2015). All of films owe an incalculable debt, of course, to Stanley Kubrick and Arthur C. Clarke's brilliant 2001: A Space Odyssey. Fans of 2001 are advised to head straight for Space Odyssey: Stanley Kubrick, Arthur C. Clarke, and the Making of Masterpiece, Michael Benson's incredible new behind-the-scenes narrative of the movie’s creation. (Teaser: the black monolith that descends from the sky at the beginning of the film? It was actually a piece of wood, covered in dozens of layers of black lacquer.) 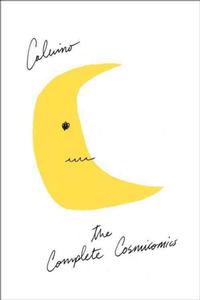 If it is the vast and overwhelming mysteriousness of outer space that you find compelling about Apollo, you might enjoy Cosmicomics (1968), by Italo Calvino. It follows an immortal being named Qfwfq in its journeys around the developing universe in search of fun and games, mathematical adventures, and romance. 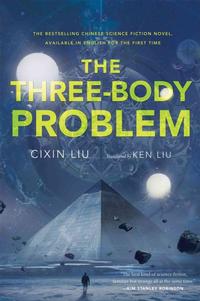 In terms of endorsements of outer space’s capacity to put our daily struggles into context, it’s hard to top President Barack Obama’s blurb for The Three-Body Problem (2007) by Liu Cixin: "The scope of it was immense. So that was fun to read, partly because my day-to-day problems with Congress seem fairly petty—not something to worry about. Aliens are about to invade!" The Three-Body Problem is a strange and amazing hybrid of a fast-paced detective thriller, a memoir of the Cultural Revolution, and a confrontation between humanity and a vastly more advanced alien intelligence. 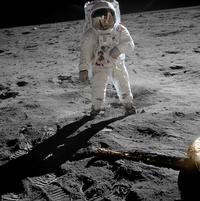 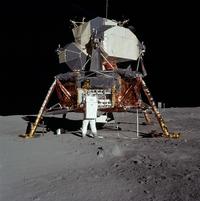 The Lunar Lander, which brought Aldrin and Neil Armstrong from Apollo 11 to the surface of the Moon. 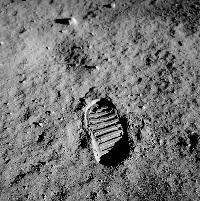 Aldrin's bootprint on the surface of the Moon.
Add a Comment