The workshop in the Free Library’s new Robert and Eileen Kennedy Heim Center for Cultural and Civic Engagement began with a quick quiz. And while I knew I wouldn’t ace it, I thought I would get by. Sliding on my reading glasses, I glanced at the drawing of a sectioned pyramid shape in front of me. My task was to fill in the different levels of the Pennsylvania court system. I figured the top triangle would be the state Supreme Court... but what are the courts leading up to that? Appellate Court? Family Court? Municipal Court? Judge Judy? Fiddling with my pen, I realized I had no clue.

The workshop hosts and administrators of the dumbfounding "test-your-knowledge" quiz was Pennsylvanians for Modern Courts (PMC), who know that modern courts affect modern lives. They are a nonprofit, nonpartisan organization who believes that knowing your courts makes you a more empowered citizen. Many Pennsylvanians are like me, with very little knowledge of the justice system, and this organization seeks to change that. They’re hosting events and programs at Parkway Central Library and in neighborhood libraries throughout the city to help ensure equal access to judges through civic education.

Court processes can be intimidating and unfamiliar, but they can affect and change our lives. Through this new Know Your Courts series, you can take part in a general workshop, or also learn about:

Aside from working to ensure an accessible and accountable court system by educating citizens, PMC also has the goal that Pennsylvanians can come to our courts with confidence that they will be heard by qualified, fair, and impartial judges. So while they advocate for the merit selection of appellate judges (rather than judges being selected in partisan elections, which they believe can be influenced by money and politics), they also work with the system as it stands.They inform the public about judicial elections and electoral process. If you've ever felt like I have, you have no idea where to start doing your research for judicial candidates, never mind what to do when you're behind the voting booth curtains, staring at a list of names. Finding unbiased information to evaluate these candidates isn’t always easy! PMC hopes to provide knowledge and resources through their programs and workshops.

In the upcoming programs at Parkway Central Library, you’ll hear about judicial independence, and the importance of the judiciary being free of undue influence from the other two branches of government and private interests. You can also discover more about the merit selection of judges, which the PMC advocates for. Finally, you can hear from judicial candidates themselves in an interactive Judicial Candidate Forum, hosted by PMC and the Philadelphia Bar Association, featuring those seeking elections to Pennsylvania's Superior Court.

Lady Justice wears a blindfold, but we shouldn’t be caught unawares when it comes to Pennsylvania’s modern courts, like I was during that quiz. So get informed at the Free Library!

Lady Justice
Courtrooms can seem unfamiliar and unnerving--knowing what to expect can help. 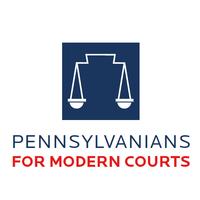