The first guitar Bruce Springsteen used was rented from Diehl’s Music in Freehold, NJ, until the 7-year-old future rock star felt he had no skill for the instrument and that he could no longer spend his "mother’s hard-earned cash" on the rental fee.

If young Bruce had access to the Free Library’s Music Instrument Collection (celebrating its third anniversary this month!), where guitars can be borrowed for free, he wouldn’t have had to worry about that rental cost.

He managed to do okay for himself, though.

Today, Bruce Springsteen turns 70, and since his first studio album 46 years ago, he’s given us some of the most cinematic, poetic, feel-it-in-your-bones rock music any American songwriter has ever created. He’s released 20 studio albums, not including his many compilations and live albums. His concerts are so prolific people religiously watch recordings of them for decades after that fact. He’s inspired countless biographies, and even wrote his own.

For the release of his autobiography Born to Run, he visited Parkway Central Library to the ecstatic response of local fans—and even many who drove for hours or booked a flight just to get a handshake or a hug from The Boss.

The waiting is the hardest part! #BornToRead

I was there that day three years ago, before I even began working for the Free Library, and it will always be one of my favorite memories.

As a fan younger than Bruce Springsteen’s career, I don’t think there has been a single month of my life that I went without hearing his iconic voice. When I first learned to use my parents’ record player at 4 years old, it was so I could listen to "Thunder Road" without having to ask someone to put it on for me. I’ve seen him a dozen times live, including when I was a broke newspaper reporter just out of college and had to choose between groceries and a Springsteen ticket… let’s just say I lost a few pounds that month.

And yet, standing in the grand lobby of Parkway Central Library, full of nerves and trying to push back the old adage "never meet your heroes, they’ll only let you down", I quickly learned that my bona fides as a Springsteen fan paled in comparison to some around me. There were folks there who drove to Asbury Park to see him at The Stone Pony before he hit the big time. There were others who had decades of adoration under their belts and had traveled the country to see him perform live with the E Street Band.

At least three different generations were together in some instances, The Boss’s music handed down like a family heirloom.

The Free Library is all about bringing people together, and for one rainy day in the fall of 2016, Bruce Springsteen helped us do just that, as people joyfully swapped stories and quoted lyrics waiting in line to meet their hero. In this case, no one was let down.

So we at The Free Library wish Bruce Springsteen the happiest of birthdays. You may be 70 years old today, but you’ll still be "Growin’ Up" with generations to come. 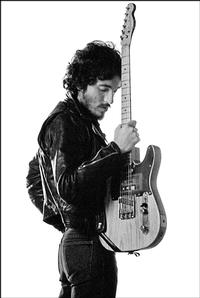 And then there was that time The Boss wrote a school absence note for one of his young fans who visited him at Free Library... : D 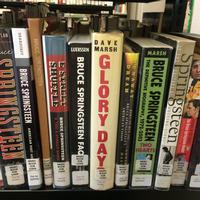 Just a sample of the many titles about Bruce Springsteen we have for you to borrow through our catalog!
Add a Comment