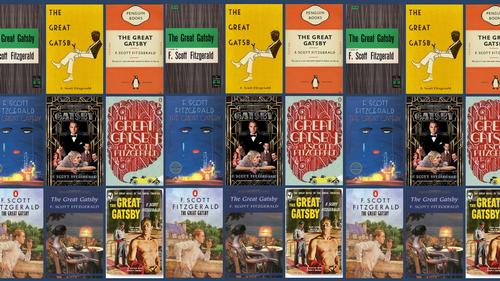 F. Scott Fitzgerald would be 123 years old today, if human beings commonly lived to this age and had he not been a self-destructive parvenu, much like his most famous character.

In fact, F. Scott Fitzgerald only lived 44 years—many of them turbulent—barely outlasting Jay Gatsby, whose death at 32 was the tragic denouement of one of the greatest novels in American literature.

From humble beginnings, Fitzgerald took to the trappings of the roaring ‘20s in such a manner that he became widely considered the voice of the era, much like his title character became a fictional mascot for the conspicuous consumption of the time.

Both troubled romantics, F. Scott Fitzgerald and Jay Gatsby were both met by untimely deaths precipitated by their passionate and excessive lives. It is perhaps because of the tragic nature of the character and his creator that we love them.

Although Fitzgerald’s death was due to failing health caused by his alcoholism, and Gatsby’s was a homicide, their deaths mirror each other in a different way—they marked the lonely downfalls of men with seemingly enviable lives. So much so, that when Dorothy Parker attended Fitzgerald’s funeral, she quoted directly from Gatsby’s fictional funeral.

Parker told The Paris Review in 1956, "When he died no one went to the funeral, not a single soul came, or even sent a flower. I said, 'Poor son of a bitch,' a quote right out of The Great Gatsby, and everyone thought it was another wisecrack. But it was said in dead seriousness. Sickening about Scott. And it wasn’t only the people, but also the indignity to which your ability was put."

Just before the character Owl Eyes calls Gatsby a poor son of a bitch in the novel, the narrator Nick remarks that Gatsby’s beloved Daisy hadn’t attended the funeral—hadn’t event sent a message or a flower.

Neither man, real or fictional, would live to see the impact that they would have on American culture for decades to come. The Great Gatsby sold more than 30 million copies, but mostly only after Fitzgerald’s death. Both Fitzgerald and Gatsby have been played to moving, tragic effect on the silver screen in blockbuster movies.

Fitzgerald wrote more autobiographically in This Side of Paradise and The Beautiful and Damned, but in my mind he will always be nearly interchangeable with the dreamer who created a world for others to enjoy, among the whisperings and the champagne and the stars, but was never able to enjoy himself.

So happy birthday, Scott, and thanks for the party. You’re worth the whole damn bunch put together. 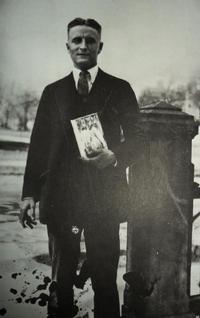 F. Scott Fitzgerald holding a copy of The Great Gatsby

Both Fitzgerald and Gatsby have been played to moving, tragic effect on the silver screen in blockbuster movies.
Add a Comment