If you’re looking for something out of the ordinary, our November selections should be be of interest. There are sci-fi, fantasy, and amazing true stories that will capture your imagination and stimulate the mind... 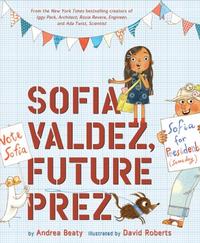 Sofia Valdez, Future Prez written by Andrea Beaty, illustrated by David Roberts
Every morning, Abuelo walks Sofia to school, until one day he hurts his ankle at a local landfill and he can no longer do so. Sofia misses her Abuelo and wonders what she can do about the dangerous Mount Trashmore. Then she gets an idea—the town can turn the slimy mess into a park! She brainstorms and plans and finally works up the courage to go to City Hall—only to be told by a clerk that she can’t build a park because she’s just a kid! Sofia is down but not out, and she sets out to prove what one kid can do. A new book from the creators of Iggy Peck, Architect; Rosie Revere, Engineer; and Ada Twist, Scientist. 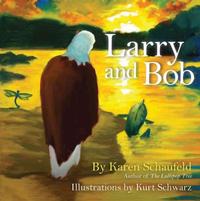 Larry and Bob written by Karen Schaufeld, illustrated by Kurt Schwarz
A beautifully illustrated book that depicts a healthy male friendship in a version of Aesop’s "Lion and the Mouse". Two animal fathers—Larry, a bald eagle guarding his egg in a tall tree and Bob, a smallmouth bass, "protecting 19,003 eggs" in the river below—form an unusual friendship. When Larry catches Bob, he appeals to Larry, "dad to dad," agreeing to let the eagle eat him in one year, after his own fry are grown. Larry is skeptical but makes the deal, and ultimately, this decision saves the life of his chick, Larry Junior, whom Bob later rescues when he falls into the river. When Bob finally goes to meet his fate, Larry can't eat him—after all, the fish saved his son. Instead, they form a life-long friendship. Eventually, Bob's age catches up with him, and he asks Larry to take him on one last flight. Schaufeld tells the story in a calm, melodic style. Several of Schwarz’s paintings show the fish's perspective from underwater, and the textured results are suitable for framing. The placement of the two male characters as caregivers and primary parents puts a nice spin on gender expectations. 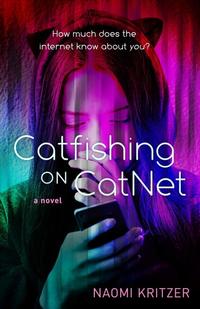 Catfishing on CatNet by Naomi Kritzer
How much does the internet know about YOU? A thought-provoking, near-future YA thriller that could not be more timely as it explores issues of online privacy, artificial intelligence, and the power and perils of social networks. Because her mom is always on the move, Steph hasn’t lived anyplace longer than six months. Her only constant is an online community called CatNet—a social media site where users upload cat pictures—a place she knows she is welcome. What Steph doesn’t know is that the admin of the site, CheshireCat, is a sentient A.I. When a threat from Steph’s past catches up to her and ChesireCat’s existence is discovered by outsiders, it’s up to Steph and her friends, both online and IRL, to save her. 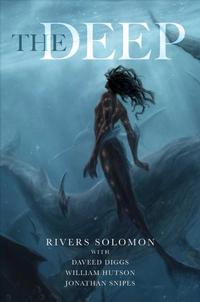 The Deep by Rivers Solomon
Yetu holds the memories for her people—water-dwelling descendants of pregnant African slave women thrown overboard by slave owners—who live idyllic lives in the deep. Their past, too traumatic to be remembered regularly, is forgotten by everyone, save one—Yetu, the historian. She remembers for everyone, and the memories—painful and wonderful, traumatic and terrible and miraculous—are destroying her. And so, she flees to the surface, escaping the memories, the expectations, and the responsibilities, discovering a world her people left behind long ago. Yetu will learn more than she ever expected to about her own and about the future of her people. If they are all to survive, they'll need to reclaim the memories and own who they really are. 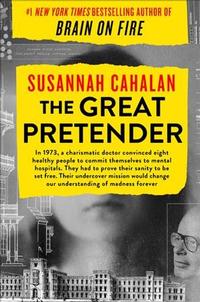 The Great Pretender: The Undercover Mission That Changed Our Understanding of Madness by Susannah Cahalan
Cahalan chronicles a key event in the history of mental illness. In the 1970s, Stanford psychologist David Rosenhan and seven other perfectly well-adjusted individuals posed as patients in asylums nationwide and emerged, after having to prove themselves sane, with surprising diagnoses and harrowing stories of treatment. The experiment led to institutional closings and radical change in the field of psychiatry, but Calahan reveals that events were not as they initially seem. 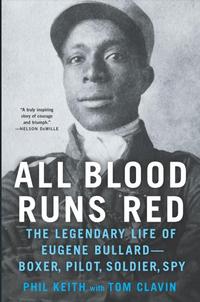 All Blood Runs Red: The Legendary Life of Eugene Bullard—Boxer, Pilot, Soldier, Spy by Phil Keith
The incredible life story of Eugene Bullard, the first African American military pilot in WWI, who went on to become a self-taught jazz musician, a Paris nightclub impresario, a spy in the French Resistance, and an American civil rights pioneer. 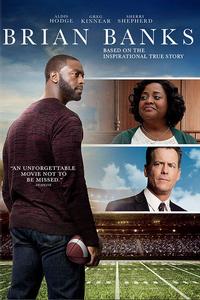 Brian Banks | Starring: Aldis Hodge, Greg Kinnear, Sherri Shepherd | Directed by Tom Shadyac (Release Date 11/12/2019)
At 17 years old, Brian Banks has a real chance at a professional NFL football career until his classmate, Kennisha, accuses him of rape after he scorned her at school. Despite a lack of evidence, Banks is pushed to take a plea deal while evidence of his innocence is ignored during his trial. Railroaded through a broken justice system, he is sentenced to a decade of prison and probation while being labeled a sex offender. The California Innocence Project and Justin Brook decide to take on Brian's case to help him finally gain justice to reclaim his life and fulfill his dreams of playing in the NFL.

Check out these new titles available in November in our catalog and at a neighborhood library near you!
Add a Comment