Have you heard that Tommy Orange’s breathtaking novel There There is the 2020 One Book, One Philadelphia featured selection? If you don’t have a copy yet, don’t worry: the Free Library has over 400 copies available to borrow, as well as downloadable audiobook and ebook editions. Free copies of the book will also be given out at every neighborhood library book discussion! Check one out today and join the rest of Philadelphia as we progress through the reading period, which runs now through January 22.

As you read, you may wish to discuss There There with a friend, neighbor, coworker, or relative who’s also making their way through the novel—or get ready for one of the many group book discussions that will occur across Philadelphia during the One Book programming season: eight inspiring weeks of conversations, workshops, film screenings, poetry readings, community panels, and more, all based on the themes of There There. The programming season will take place from January 22 to March 18.

What, though, are the themes of There There, and how can we discuss them with each other thoughtfully? In last week’s #OneBookWednesday post, we examined some key historical events referenced in the book, as well as some of its most important terms; take a look and share it with others who are reading There There. Consider, too, these broader themes and related questions. 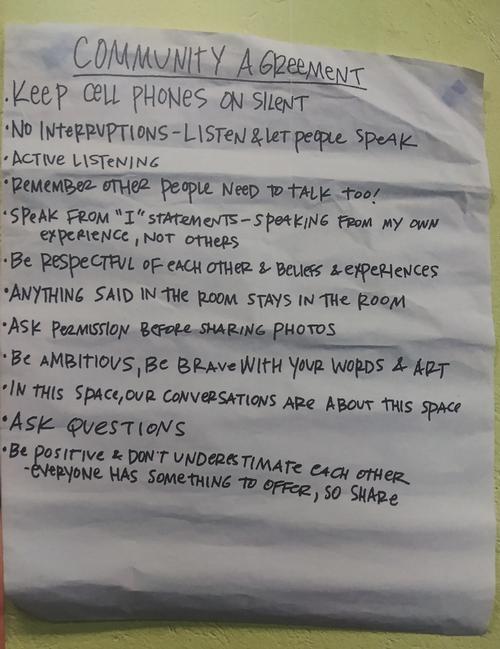 Reading together also means listening together. If you’re discussing There There with a group, try one or more of these tips for making every member of your conversation feel recognized and heard.

For more depth, some great ideas for community agreements, and other considerations regarding how to talk, listen, and take care of ourselves and each other around spaces of dialogue, take a look at the Anti-Oppression Network’s "Safer Space Policy/Community Agreements" resource.

And don’t forget to mark your calendars for the One Book, One Philadelphia Kickoff Event with Tommy Orange on Wednesday, January 22, 2020, at the Parkway Central Library’s Montgomery Auditorium at 7:30 p.m.

Have a topic or tip to share? Add it to the comments below!

Read this blog post and get ready for one of the many group book discussions that will occur across Philadelphia during the One Book programming season!
1 Comment | Add a Comment
Hey
Fran - Philadelphia