Did You Know?: Black Friday was Born in Philly

"In 1621, colonists invited Massasoit, the chief of the Wampanoags, to a feast after a recent land deal. Massasoit came with ninety of his men. That meal is why we still eat a meal together in November. Celebrate it as a nation. But that one wasn’t a thanksgiving meal. It was a land-deal meal." (There There, page 4). The story learned as children about Thanksgiving has largely been de-bunked. We know that Plymouth, the village where the pilgrims first settled, was abandoned because the Wampanoags who lived there previously had been sold into slavery or decimated by a small pox plague. And you thought I wasn’t going to make this about One Book, One Philadelphia! What Tommy Orange describes above about the first Thanksgiving is that, at least for the colonists present, it was founded on a doorbuster; some kind of deal, a sale, a 'big savings' on land. If we want to know where America’s post-Thanksgiving tradition of going to the mall pre-dawn came from, we can start there, with its violent capitalist beginnings.

The term ‘Black Friday’ itself has an interesting story. Part A is that two Wall Street guys in the late 1800s had tried to buy up every piece of gold on America’s green earth, so that it would become really expensive and they could turn around and sell it (meanwhile, the board game Monopoly wouldn’t come out until 1903). Everyone found out about the ruse on a Friday in September (how did they do that without the internet?!), sending the whole market into a free-fall void and black hole that bankrupted everybody from barons to farmers. This is why we can’t have (all of the) nice things.

Part B is that, in connection with the day of shopping that follows Thanksgiving, the term Black Friday was first used (ever) in Philadelphia in the 1960s by the city’s police, who had been annoyed by "the hordes of suburban shoppers and tourists [who] flooded into the city in advance of the big Army-Navy football game held on that Saturday every year,"  and so they started calling it "Black Friday". Digging into that a little more: this was a day that according to this 1961 press release, police found to be "an irksome problem" and sought to deter people from the suburbs by giving it, in my understanding, an intentionally racialized name. They were trying to scare people away by leveraging negative perceptions about African Americans. Here again, I think of There There for its discussion of the lasting impacts that misrepresentative public narratives can have. Though some folks in the 1960s tried changing the name to "Big Friday", the former had already stuck.

It had been a headache apparently for the cops, this day of suburbanites flooding into the city, but what do we do with lemons? We make lemonade. Through the 1980s, retailers all over the country embraced the culture and spectacle of hordes. Companies got together and invented another narrative, this time about how a day of deals pushes the year's sales into the black. In accounting, "in the black" means profit and "in the red" means trouble. This is a day of great profit for retailers, who very smartly spin it as a day of great savings for consumers (you and me, people whose job it is to consume!) In the years since, like any healthy marketing campaign, Black Friday has grown its own influence and now spans Thursday night to Cyber Monday, and like any strong colonial effort, the tradition has spread to many other countries as well.

If you’re feeling icky—or seriously just tired, because extreme shopping is EXHAUSTING—there are some alternatives! My favorite one is Buy Nothing Day. It’s simple, it happens on the same day as Black Friday; except instead of shopping, you buy nothing. The first Buy Nothing Day was organized in Canada in September 1992 "as a day for society to examine the issue of overconsumption." Don’t you just love Canada? On Buy Nothing Day, some folks have made a big deal of doing things like standing in malls and publicly cutting up their credit cards. I don’t think we have to do all that, it’d be fine if we took a walk with the dog or something. In fact, a fairly recent trend is #OptOutside where instead of shopping you go for a hike or participate in a nature or block clean-up. This movement was started by REI in 2015, who decided to remain closed on Black Friday to encourage people to go be in nature. National Parks now have begun participating by staying open, offering discounts, and guided hikes.

Other alternatives for the shopping serotonin spike might be supporting local artists and craftspeople by purchasing the handmade items they've thoughtfully created or curated. The next West Craft Fest is on December 7 and 8 at the Rotunda; make a bonanza of it on that same Saturday by stopping nearby at Bartram’s Garden for their Holiday greens sale and marketplace; and check out the Holiday Punk Rock Flea Market (don’t worry, I’m not punk rock either and they still let me in) at the Armory on December 21 and 22.

If you do shop, you aren’t alone—you’re with 135.8 million friends doing the same, and 183.8 million more on Cyber Monday. Maybe the attraction to heavy shopping in PJs from the couch will overtake Black Friday one day and we'll eventually only have Cyber Monday, and after that, maybe we can pay for things just by thinking about them. 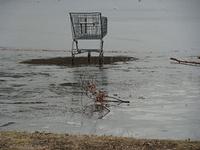 Late capitalism / shopping won't save us 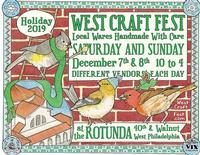