Part of my job is to show Parkway Central Library’s private spaces to those who are interested in renting them for events. At the end of those tours, I often take them to the Heim Center, one of the new public library spaces that opened in April 2019.

Even though it is not available for rent, I want people to know that this space exists along with the newly renovated BRIC and Teen Center. When I walk people into the Heim, I never lower my voice as I discuss the new construction, the rooms, and their uses. Those that take a tour with me always respond with a whisper,  as if to silently remind me that this IS a library and I may have forgotten to use my "inside" voice.  I always counter with, "IT’S OKAY. YOU DON’T HAVE TO BE SILENT IN HERE." This always tickles people and I watch as they survey the Heim once more, but this time with a new set of eyes.

This is the point that Curtis Mitchell wants to drive home. As an employee of the library for 21 years, he has seen the space through its transformation, going from the stacks to the Moshe Safdie-designed collaborative meeting space that it has become today. He has made it his duty to bring life into the Heim and make the public aware that they can have vocalized fun. This is what inspired his idea to create a game night. "It’s such a lovely space. I’ve been thinking of ways to bring the community into the Heim and make them utilize it. I thought that a game night would be the perfect thing. If you look at the Heim, it has that living room feel, which is where most people do their gaming."

With help from Hatching Innovations (a resource courtesy of the Strategic Initiatives Department), he was able to purchase a myriad of games for public enjoyment. Starting on January 30, this new Game Night event series will take place every last Thursday of the month from 4:00 p.m. to 8:00 p.m.

Prior to the official launch, he made sure to do a couple of test-runs, the first of which was on Halloween night. With literally no promotion, that night brought in 32 people (a mix of children and adults). The second test run happened the week before Thanksgiving and went equally as well. Always the planner, Curtis made sure he was well-prepared before shopping for the games. Over the course of a few weeks, he asked patrons what kind of board games they played with their friends and families. "Every single game in here was mentioned by someone. There are a couple that were mentioned that I haven’t gotten yet. If I don’t get a donation for them, I’ll get them myself. I want to try to hold onto the money I have left to buy snacks." Realizing that these game nights would be during dinnertime for most families, he decided to incorporate snacks and water when managing the budget.

While Curtis is the lead on this project, he has definitely gotten help from nearby departments in the library. "The Children’s Department has been very generous. They let me hold some of their material. Best of all, they let me borrow their giant Jenga and their giant Connect Four. Those two games are in very high demand." The Teen Center has even offered to let Curtis borrow their PlayStation for upcoming game nights. He also has a couple of people from the Philadelphia gaming community that will be volunteering their time to help those who may need some direction. "They know how to play everything. Patricia and Jae—I have to shout them out!"

Make no mistake—there will be something for everybody during these game nights. From the classic (and sometimes infuriating) Simon to Ellen DeGeneres’ Heads Up.

"My goal is to not only attract patrons to it, but I want staff to join in as well, and even bring their families. I know it’s really hard to stay at a place after you get off work, but I think this could be a place where you can come in and have some fun with it. It’s a good opportunity for your family to see some of the wonderful things that happen in the place that you work."

Hatching Innovations grants money to Free Library staff that want to develop programming and services for the library. Have an idea? Let them know! 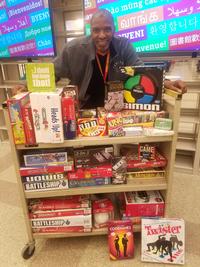 Curtis Mitchell and his games 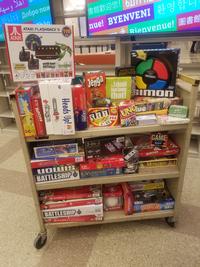 More Games!
4 Comments | Add a Comment
One of my favorite things at one of my favorite places! I hope that this endeavour not only is successful, but that it endures
JB - Philadelphia
I am so sorry that I am just seeing this now! I would live to come and have some games to donate. I will find Curtis before the next one and make arrangements,
Elaine Jenson - Philadelphia
Great idea! Let's break out the chess sets. Maybe start a chess ladder as a means to compete?
Joe Shemtov - Philadelphia
We loved the Game Night ❤️ Thank you for putting it together !!
Zakki's Mom - Philadelphia