Talk About It! @ the Central Library--Pennsylvania at the Crossroads 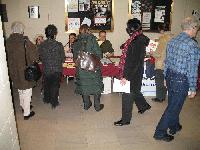 If you've never been to one of the Central Library's Talk About It! forums, you're missing out. Not to toot our own horn, but the past three events (discussing editorial cartoons, gambling, and violence) have been some of the more inclusive and impassioned debate sessions this blogger has ever attended. Last night's citywide summit on immigration was no exception. If you didn't attend, here is a brief recap of the panel:

A good mix of people turned out, braving the cold and heard a balanced discussion representing various viewpoints. Many topics were addressed: hard numbers and facts about illegal and legal immigration; stories about immigration experiences; questioning closed v. open borders; the Hazelton Act; new activism and legislation expanding the rights of immigrants residing within U.S. borders; and questions of the economic and political impact of immigration.

Did you attend? What did you think? Let's get a conversation going....