Poet of the Week--Audre Lorde

Audre Geraldine Lorde wrote her first poem in the eighth grade. In 1954, she spent a pivotal year as a student at the National University of Mexico and then returned to the United States, attending Hunter College . During her college years, she became an active member of the gay community in Greenwich Village. Lorde earned a Masters of Library Science from Columbia University in 1961 and was head librarian at Town School Library in New York City until 1968. She published poetry regularly in the 1960s. Her first book, The First Cities (1968), was edited by famed Beat poet, Diane di Prima. Lorde married attorney Edwin Rollins and had two children. The two divorced in 1970. She spent a year in residence at Tougaloo College in Mississippi, funded by a National Endowmment of the Arts grant. There, she met her future life partner, Frances Clayton. Lorde died in 1992 in St. Croix from cancer. Before her death, she took a new name in an African naming ceremony: Gamba Adisa, meaning Warrior: She Who Makes Her Meaning Known. Her publications include: Cables to Rage (1970 ); From a Land Where Other People Live (1973 ); New York Head Shop and Museum (1974 ); Coal (1976 ); Between Our Selves (1976 ); The Cancer Journals (1980 ); Chosen Poems: Old and New (1982 ); Zami: A New Spelling of My Name (1983 ; Sister Outsider : Essays and Speeches (1984 ); Our Dead Behind Us (1986 ) ; and The Marvelous Arithmetics of Distance (1993 )

I
is the total black, being spoken
from the earth's inside.
There are many kinds of open
how a diamond comes into a knot of flame
how sound comes into a word, coloured
by who pays for what speaking.

Some words are open like a diamond
on glass windows
singing out within the passing crash of sun
There are words like stapled wagers
in a perforated book, -buy and sign and tear apart-
and come whatever wills all chances
the stub remains
an ill-pulled tooth with a ragged edge.
Some words live in my throat
breeding like adders. Others know sun
seeking like gypsies over my tongue
to explode through my lips
like young sparrows bursting from shell.
Some words
bedevil me.

Love is a word, another kind of open.
As the diamond comes into a knot of flame
I am Black because I come from the earth's inside
now take my word for jewel in the open light. 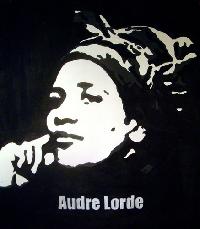