Since the COVID-19 crisis shut down libraries, several Philadelphia City Institute staff members have been directly assisting neighbors and community members by helping with food distribution throughout the city.

Sheryl Wright, a part-time Library Assistant who has been packing food for seniors at the SHARE Food Program of Philadelphia, says, "Helping to make sure that people get the food they need is important work at any time—and that is especially true now. In a country with so much wealth, it shouldn't be the case that seniors, or any other group of people, have to be concerned about where their next meal is coming from."

When the stay-at-home order was issued, plans were already being put into place to ramp up food distribution. Children’s Librarian Liz Heideman has been assisting at Wharton Square Playground, a city-sponsored food distribution site near her home in South Philadelphia. She helps to give out prepackaged boxes of pantry goods and produce. She finds the work directly related to her role as a librarian: "At our very core, our work is to help our communities."

Seasonal Library Assistant Jessica Blundin, volunteering at the Food Warehouse Distribution Center in Roxborough, helps to pack and organize the food boxes given out at city sites. During a recent shift at the warehouse, Jessica’s task was going through packages of onions, weeding out the old, and compiling the fresh ones in a large bin. She says, "I decided to volunteer for this program because it is a small part of helping those in need and I am lucky enough to have the time, resources, and health to do so."

One of the many other organizations in Philadelphia working to feed the hungry is The Sunday Love Project, which distributes meals out of the Church of the Holy Trinity on Rittenhouse Square, outside the Municipal Services Building, and in the Kensington neighborhood. Library Supervisor Erin Hoopes has been volunteering with Sunday Love, making and packaging hot meals for people experiencing homelessness, as well as with MANNA, an organization that has provided meals for people suffering from serious illnesses since 1990.

"Volunteering is keeping me sane," Erin says. "At the library, I interact with people all day and it feels good to be able to help them. The thought of spending weeks at home without being able to directly give back to my community didn’t seem possible, and I’m lucky enough to be in good health and volunteer." Other staff members found similar rewards in their work. Liz says, "I am meeting people from many different city departments, as well as student workers and volunteers, and learning about what they do and sharing my work with them."

Sheryl adds, "Working with others connects me to and reminds me of the power that lies in community. It also feels nice to work with a group of people around a shared focus." And Jessica agrees: "Working with the community at a time like this is a blessing because it shows there are people who feel the same as I do—that, because we are able, we need to be doing everything we can to give relief to those who are experiencing food shortages, illness, or are unable to leave their homes. Even something as small as people coming together to fold and pack boxes is proof of the unity among the community."

Thanks to the team at Philadelphia City Institute and all the staff members of the Free Library who are volunteering at food distribution sites during this critical time! 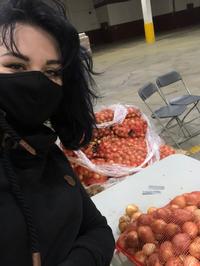 Jessica at the Warehouse in Roxborough
Sheryl at the SHARE Distribution Center
Liz at Wharton Playground
1 Comment | Add a Comment
I'm so glad to see staff are still giving back to the community! Library workers do not need a building to make a difference. Thank you Sheryl, Liz, Jess and Erin!
Vicki - South Philly