How do we engage with our communities during a pandemic? In particular, how do we engage creatively with the goal of affecting social change? These questions have been at the forefront of our minds since mid-March.

In the spirit of building community during the lockdown, the Art Department collaborated with Philadelphia guerrilla performance artist Beth Heinly, who conceived of the Community Cultural Exchange (CCE), a month-long social art practice group during the artist's self-appointed artist residency at the Parkway Central Library.

CCE existed as a virtual space for discussing and organizing community outreach during the month of May and into June. The group attracted a number of artists and teachers from the greater Philadelphia area as well as staff members from multiple Free Library of Philadelphia locations, including your author, Catherine Martin, librarian at Logan Library and Alina Josan, Art Department librarian.

Together, the group developed an efficient and collaborative practice, meeting weekly online for one hour to plan each week’s action, and brainstorming and communicating throughout the process in a Google Group.

CCE’s work was driven by Heinly’s own practice of guerilla performances, performance art, and self-described "amateur cosplay". The group was also influenced by the experiences of the other participants and their desire to find creative ways to engage with their communities.

Here are some of the projects proposed by Heinly that the group collaboratively developed during their virtual time together:

Helping to clean up vacant lots in our communities
Beth planted flowers and left behind a temporary sculpture of social distance circles laid out in twine, inspired by Milan Knížák's "Rock Ritual" and Yoko Ono. Another member of the group cleaned up a lot in Dickinson Narrows and donated to the Philadelphia Community Bail Fund.

Save Our Arts Organizations banners
Between weeks three and five, members of the group became increasingly involved in local protests over the murder of George Floyd, police brutality, and systemic white supremacy. The final proposed action was the installation of banners in our communities to draw attention to the effects of City budget revisions on particular arts organizations. Several members were able to install banners advocating for education, libraries, homeless services, and art institutions such as the African American Art Museum in Philadelphia.

The group’s most far-reaching project involved collecting and displaying art from the young people in their communities. Stay tuned to read more in an upcoming post about the Youth Street Art installation and how you can replicate it in your community! 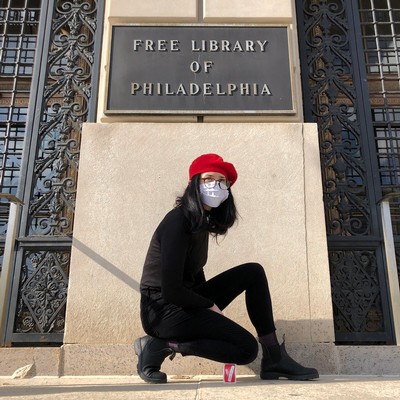