This is the second in a series of posts highlighting major figures in jazz history who were from Philly (even if most ended up in New York City). A virtual book discussion of Wishing on the Moon: The Life and Times of Billie Holiday by Donald Clarke will take place on Thursday, August 20 at 8:00 p.m. Every one of the bolded album titles below can be streamed for free with your library card via Alexander Street’s Jazz Music Library database.

Elinora Fagan was born in 1915 at Philadelphia General Hospital, near the site of the current University of Pennsylvania Hospital campus. The woman who would come to fame as Billie Holiday grew up in our sibling city to the south, Baltimore. Her mother Sadie, just a teenager when her daughter was born, had minimal support from Elinora’s jazz-guitar-playing father. Elinora dropped out of school at age eleven and spent the next years in and out of a residence for "troubled African American girls" run by the Catholic church.

By the late 1920s, Elinora and Sadie moved to Harlem. At the turn of the decade, the newly self-named Billie worked several sides of the nightlife, plying the world’s oldest profession while singing the freshest music in the clubs of Harlem and 52nd Street. At just 18, her unique vocal approach captured the ear of not-yet-legendary producer John Hammond, who connected her to not-yet-a-household-name bandleader Benny Goodman. In the coming years, she would make historic recordings with groups led by Goodman, Teddy Wilson, Count Basie, Artie Shaw, and more.

Before long, Billie Holiday was a proper star heading her own bands and, in the two decades that followed, she redefined what a jazz singer could be. She sang with the bent notes of a saxophone, phrased playfully behind the beat, and could get just as much musical nuance out of a melody as any instrumentalist could. She also carried a unforgettable stage presence, gardenia in her hair, exuding sensual allure and confident mystery. Off-stage, she engaged heartily in the scene’s indulgences: alcohol, reefer, opium, heroin. She could drink almost anyone under the table, and she had no problem using a smashed bottle to defend herself if things got rough. At the same time, she and Sadie were mothering figures to the scene. She used her earnings to set her mother up with a restaurant called Mom Holiday’s, where her peers could tuck into a plate of soul food after a long night of playing.

In 1947, the city of her birth became central to her life in an unpleasant way. She was staying at the Attucks Hotel at 15th and Catharine, the choice spot for Black entertainers and athletes not welcome in Center City’s luxury hotels. After a show at the Earle Theater at 11th and Market, her room at the Attucks was raided. The bust came courtesy of the Federal Bureau of Narcotics (FBN), headed by notorious white supremacist Harry Anslinger, who wrote internal memos that jazz musicians lives "reek of filth" and claimed that "reefer makes darkies think they're as good as white men." Anslinger had assigned agents specifically to investigate Holiday, who he saw as a dangerous exemplar of Black creative freedom and personal liberty. The Feds also hated that she was widely known to be bisexual—her biographer quotes her telling a friend, "sure, I was with a lot of women; but I was always the man."

She spent a year in federal prison, during which she was denied treatment as she quit heroin cold turkey. Her incarceration meant she was stripped of her New York City cabaret card, which musicians had to have to perform anywhere that served alcohol. Ironically, this drought of NYC opportunities meant she spent more time in Philadelphia. She performed regularly at the Earle Theater, as well as the Showboat, which was housed in the basement of the Douglas Hotel at Broad and Lombard. The Douglas was her hotel of choice after the bust at the Attucks, and a historical marker now stands before it proclaiming proudly (albeit with odd syntax), "In this city, she often lived here."

In the decade that followed, Holiday continued making memorable music with fantastic musicians, but heavy drinking and drugging took their toll. So too did the consistent FBN harassment, as well as the physical, psychological, and financial abuse of a string of romantic partners who were often serving as her manager at the time. Her later concerts were often unpredictable. She got it together for each recording date, but her voice had acquired a gravelly rasp that disappointed some fans.

Holiday died in 1959, but not before the FBN arrested her in her hospital room, handcuffed her to her bed, confiscated the flowers and gifts that friends and fans had sent her, and ultimately denied her methadone to treat her heroin withdrawal. She wrote in her memoir, Lady Sings the Blues:

Imagine if the government chased sick people with diabetes, put a tax on insulin and drove it into the black market, told doctors they couldn’t treat them, then sent them to jail. If we did that, everyone would know we were crazy. Yet we do practically the same thing every day in the week to sick people hooked on drugs.

This account of Holiday’s life has not been interspersed with listening recommendations, as was the first entry in this series, on John Coltrane. Most of her recordings were made before the rise of the long-player record (the LP), which made the album format possible. As a result, the Holiday recordings available on the Jazz Music Library are mostly compilations, many of which span many years, many of which overlap in content. Here’s an annotated list of some highlights:

The Commodore Master Takes, mostly from 1939, covers many of Holiday’s early masterpieces. It includes her first recording of the anti-lynching classic "Strange Fruit," which her first label, Columbia, had refused to let her record. Anyone who wants to dig hard into this era will enjoy the riches of The Complete Commodore Recordings.

The Complete Decca Recordings finds Holiday backed by larger groups, including lush strings. The collection starts with one of her biggest hits "Lover Man (Oh, Where Can You Be)," a song of abject despair presented with astonishing delicacy and nuance.

Masters of Jazz: Billie Holiday features some of Holiday’s top-shelf late 1940s bands including Art Tatum, Coleman Hawkins, Roy Eldridge, and many more of the players who for the previous decade had been at the forefront of the evolution of jazz, from music for dancehalls to music that demanded rapt attention. These are live recordings, and you’ll get a glimpse of the way she could enthrall a crowd on "Billie’s Blues."

Much of Holiday’s best recordings of the early 1950s find her out in front of groups led by the great pianist Oscar Peterson (with native Pennsylvanian Ray Brown on bass). Billie Holiday Sings is the strongest entry from this period on the JML. Check out her reading of Duke Ellington’s "Solitude," the way the notes bend and fade as she plays with lines like "In my solitude / you’ll taunt me / with memories that never die." She’s the consummate artist here, drawing out emotion in the lyrics that could never be captured on a page.

The period of her career when she was on Verve Records is most comprehensively represented on the Jazz Music Library. The singer and pianist Shirley Horn compiled Ultimate Billie Holiday from this catalog. Anyone eager to dive deep into this era will enjoy The Complete Billie Holiday On Verve 1945 - 1959 (CD 1-3), CD 4-6, and CD 7-10.

Of the LPs released on Verve in the autumn of her life, perhaps the best is Lady Sings the Blues—released as a companion to her autobiography, which inspired the 1972 film starring Diana Ross. Check out her world-weary take on "I’ve Got My Love to Keep Me Warm." As she sings "My heart’s on fire / the flame grows higher," it’s easy to imagine she might be thinking of something other than love.

Do yourself a favor and check out these Billie Holiday musical selections and many more at Alexander Street's Jazz Music Library! 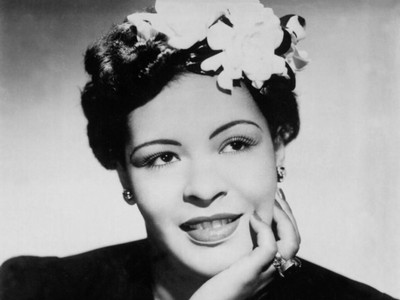 Billie Holiday and her famed gardenias
The historical marker on Lombard Ave, between Broad and 15th 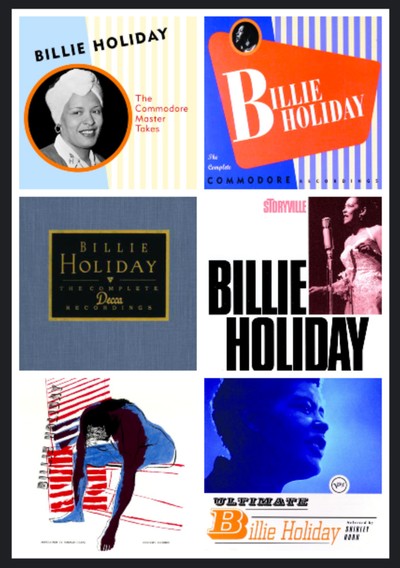 Some Billie Holiday musical highlights, available through our Jazz Music Library digital resource.
3 Comments | Add a Comment
We have her birth certificate T phila. Archives born e. HARRIS at pgh
Ed Rice - Philadelphia
Good one of the first to get It right
Michael Morgan - New york
I used to be a regular at the Showboat and Pep's around the corner on Broad St, 1959 thru the 60s. Such great memories. Saw the greats.
Ladeana Young - Newport Beach