Poet of the Week--Marianne Moore 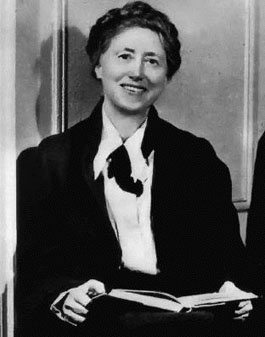 Marianne Moore, born in 1887, attended Bryn Mawr College, receiving her B.A. in 1909. In 1915, her poems began to appear alongside those of Ezra Pound, William Carlos Williams, and Hilda Doolittle (H.D.) in the English magazine, Egoist. Moore's first book was published without her knowledge by H.D. in 1921. By that time, Moore was living with her mother in New York City, working as an assistant at the New York Public Library. There, she befriended William Carlos Williams and Wallace Stevens and began submitting work to the literary magazine, The Dial. She acted as editor of the publication from 1925-1929. During her career, she was the recipient of the Bollingen prize, the National Book Award, and the Pulitzer Prize. Strangely enough, Moore was a fan of sports, and especially admired Muhammed Ali. She wrote the liner notes to his record, I Am the Greatest!

Man looking into the sea,


it is human nature to stand in the middle of a thing,


but you cannot stand in the middle of this;


the sea has nothing to give but a well excavated grave.


The firs stand in a procession, each with an emerald turkey-foot at the


reserved as their contours, saying nothing;


repression, however, is not the most obvious characteristic of the sea;


the sea is a collector, quick to return a rapacious look.


There are others besides you who have worn that look--


whose expression is no longer a protest; the fish no longer investigate


for their bones have not lasted:


men lower nets, unconscious of the fact that they are desecrating a grave,


and row quickly away--the blades of the oars


The wrinkles progress among themselves in a phalanx--beautiful under


and fade breathlessly while the sea rustles in and out of the seaweed;


the birds swim through the air at top speed, emitting cat-calls as hereto-


the tortoise-shell scourges about the feet of the cliffs, in motion beneath


and the ocean, under the pulsation of lighthouses and noise of bellbuoys,


advances as usual, looking as if it were not that ocean in which dropped


things are bound to sink--


in which if they turn and twist, it is neither with volition nor