Poet of the Week--James Wright

James Wright was born in 1927 in Ohio to a family mired in poverty. He joined the army after school and was stationed in Japan. After his service, he went to Kenyon College on the G.I. Bill, and was taught by the poet John Crow Ransom. Wright earned both his master’s and doctorate degrees at the University of Washington, studying under Theodore Roethke and Stanley Kunitz. Wright’s writing was heavily influenced by the injustices he witnessed in his youth. In 1957, he won the Yale Series of Younger Poets Award for The Green Wall. Wright was elected a fellow of The Academy of American Poets in 1971. In 1972, his Collected Poems won the Pulitzer Prize in poetry. He died in New York City in 1980.

All right. Try this,

I know and care for,

To die in a loneliness

I can't imagine and a pain

I don't know. We had

To go on living. We

Untangled the net, we slit

The body of this fish

Open from the hinge of the tail

To a place beneath the chin

I wish I could sing of.

I would just as soon we let

The living go on living.

An old poet whom we believe in

Said the same thing, and so

We paused among the dark cattails and prayed

For the ripples below their tails,

For the little movements that we knew the crawdads were making

For the right-hand wrist of my cousin who is a policeman.

We prayed for the game warden's blindness.

We prayed for the road home.

We ate the fish.

There must be something very beautiful in my body,

I am so happy. 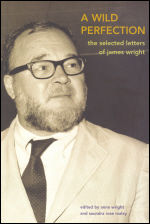