The Somali-born member of the Dutch parliament, Ayaan Hirsi Ali, will read at the Central Library tomorrow night at 8:00 p.m. Although the lecture is sold out, Ali is not popular in many political and religious circles. She first came to the limelight when her co-collaborator on a documentary about the oppression of Muslim women, Theo van Gogh, was brutally assassinated and a note threatening her life was attached to his body. The reason for such a violent act was blamed both on the documentary as well as Ali's criticisms of the roles of women in Islamic cultures. Her latest book, a memoir entitled Infidel, has received much critical attention. For more information about Ayaan Hirsi Ali, click on the following links: 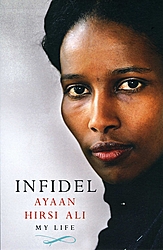