Coming Out at Work

Many of us queer people never stop coming out.

When we list our emergency contact, when we rent a car, when we take our kids to the playground—we remain surrounded by hetero- and cisnormative people, places, and things. While coming out usually gets easier over time, I think most LGBTQIA people might agree the first couple of times are usually the hardest.

Sometimes, no matter how out you are in your personal life, coming out at work can include a whole other set of hurdles. In Pennsylvania, and in many other states, someone could get fired for being queer or trans up until 2020, and I’m sure that same discrimination persists against the most vulnerable who couldn’t leverage lawyers to fight for their rights.

When I started working at the Free Library in 2007, I was officially out from the beginning when I signed my partner up for health benefits. But that doesn’t mean I always felt like I could be out on the job, especially working as a Children’s Librarian. When I told a family about a queer and gender-questioning group for teens, they complained to my supervisor that I was recruiting for homosexuality. Instead of my supervisor handling it without me knowing, I was told about the complaint in excruciating detail by them and to not promote that kind of group while working at the library.

In 2010, several young queer and gender-nonconforming people took their own lives in very publicized cases, and a nationwide anti-suicide project "It Gets Better" started up. The message was simple: out queer adults would stare into a confessional camera and tell potentially queer and questioning youth that their lives would, eventually, get better. I believed in it, and know my own life became better as I got to be out and find other queer people to build a family.

Ten years later, it is also almost sad that the meager crumbs of hope we thought might save young lives were strangers promising, without material support or authentic connection, that "it" would get "better." I wish we had instead taken to the streets demanding that families and institutions keep children, young people, and trans youth safe by confronting familial homophobia and its deadly consequences. But back then, before nationwide gay marriage and the extension of the Civil Rights Act to queers, it really did seem meaningful.

And at work, it was very meaningful. Two out Library Administrators gave several people permission to film their little videos on work time. Several of us gathered in a group at Independence Library, home to the Barbara Gittings Gay and Lesbian Collection, and filmed a little video. We got to come out—at work, on camera—with support. You can view our dated but very heartfelt video below.

I believe very much that this effort helped improve the Free Library’s institutional culture of homophobia and that more and more tiny moves from brave workers have added up to a much larger cultural shift. Now, Free Library of Pride events and celebrations are supported institutionally. LGBTQIA library workers have also recently organized together as part of an employee interest group called Rainbow Connection. You can also find countless reviews, booklists, resources, and other recommended media on our website for queer people and families.

Celebrate Pride Month by coming out, standing up, and fighting back!
We really are everywhere! 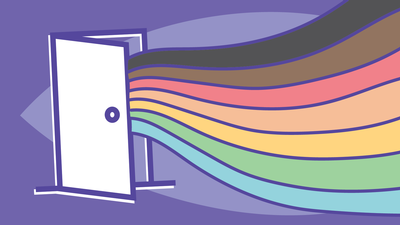 Celebrate Pride Month by coming out, standing up, and fighting back!
4 Comments | Add a Comment
Thank you for sharing your story Joel.
Jamie B. - West Philadelphia
What a powerful and awesome piece, Joel. Thank you for providing your perspective.
Kalela Williams - Philadelphia
It *was* meaningful, and it still is. Thanks for this story of bravery.
Bruce J - Philadelphia
Wow! So happy to see this. Thank you all.
Nina C. - Philadelphia