In Memory of Kurt Vonnegut

"All time is all time. It does not change. It does not lend itself to warnings or explanations. It simply is. Take it moment by moment, and you will find that we are all, as I've said before, bugs in amber."
-Kurt Vonnegut, Slaughterhouse-Five

It is with great sadness that we mourn the passing of American author and literary icon, Kurt Vonnegut, who died yesterday at the age of 84. Vonnegut, a prolific wordsmith known for his fertile imagination, was also a strong supporter of public libraries in their role as promoters and preservers of intellectual freedom. 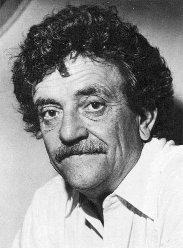