Poet of the Week | Emily Dickinson

Emily Dickinson is considered to be one of the greatest American poets, specifically of the 19th century. Many facts are known about her life, but nuances continue to be shrouded in mystery. She was born in 1830 to a successful family that provided her with an excellent founding education. She completed one year at the Mount Holyoke Female Seminary and left for unknown reasons--some speculate that it was due to homesickness; others claim that she refused to sign an oath publicly professing her faith in Christ. Emily moved back to her family's house in Amherst, Massachusetts and began writing poetry, becoming increasingly more reclusive until she stopped appearing in public entirely. In the last years of her life, she wore only white dresses and spent her days corresponding with friends. When she died, she left behind 40 handbound books containing approximately 1,700 poems. These were later edited and published. Her work is known for its concise imagery and broken rhyming meter, as well as an often witty and sardonic tone.

A Narrow Fellow in the Grass

A narrow fellow in the grass
Occasionally rides;
You may have met him,--did you not,
His notice sudden is.

The grass divides as with a comb,
A spotted shaft is seen;
And then it closes at your feet
And opens further on.

He likes a boggy acre,
A floor too cool for corn.
Yet when a child, and barefoot,
I more than once, at morn,

Have passed, I thought, a whip-lash
Unbraiding in the sun,--
When, stooping to secure it,
It wrinkled, and was gone.

Several of nature's people
I know, and they know me;
I feel for them a transport
Of cordiality;

But never met this fellow,
Attended or alone,
Without a tighter breathing,
And zero at the bone. 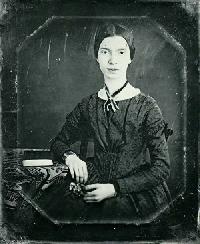