Thu, April 19, 2007
April 15th is more than America's usual "tax day"; it's also the anniversary of the day that Jackie Robinson first took the field with the Brooklyn Dodgers in 1947 and broke Major League Baseball's color barrier. This year marked the 60th anniversary of this historic event , and there will be several opportunities here in Philadelphia to honor Robinson's memory in the coming days. On Sunday, April 22 at 11:30 a.m., Jonathan Eig will discuss his recently published book, Opening Day: The Story of Jackie Robinson's First Season, in the Central Library's Skyline Room as part of the first annual Philadelphia Book Festival . Also, the Overbrook Park Branch recently opened an exhibition of items related to the Negro Baseball League and Jackie Robinson--they will host a lecture entitled Legends of the Game: An Oral History of the Negro Baseball League on May 15th. Lastly, if you want to celebrate Robinson's legacy at an MLB ballpark, the Philadelphia Phillies will be honoring Jackie Robinson on April 23rd (rescheduled from April 15th due to weather) when team members will all wear his retired No. 42 during their game against the Houston Astros. 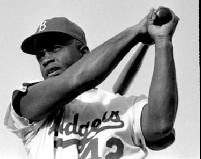