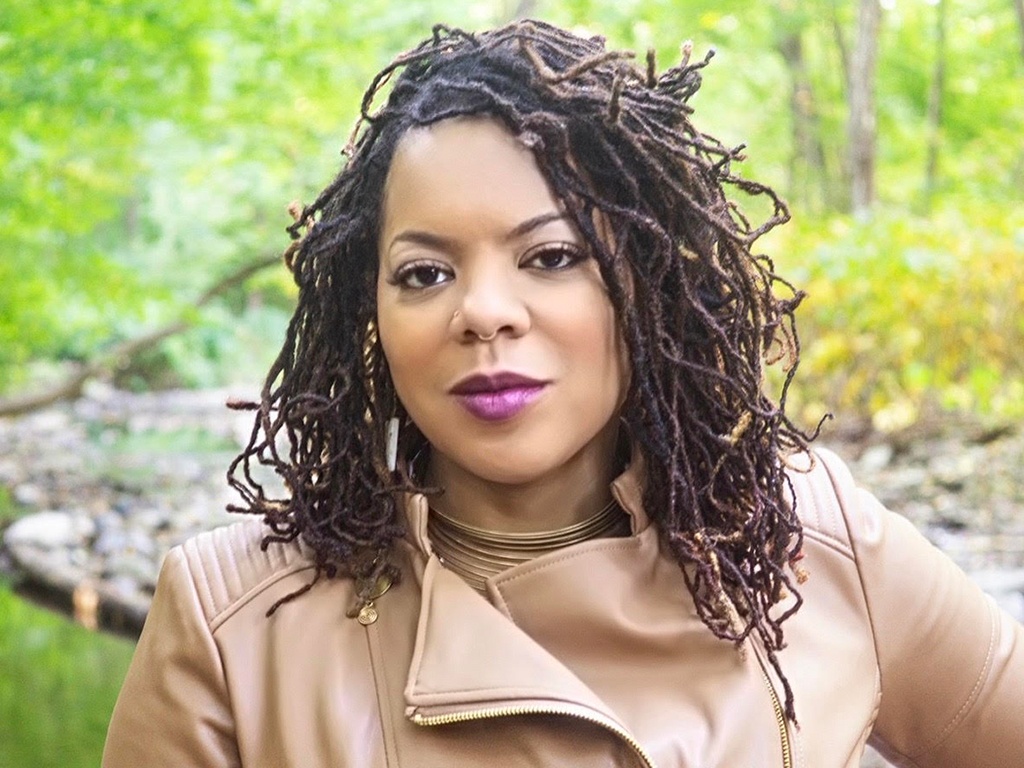 The committee of poets, educators, and arts-organization professionals selected Airea from a deeply talented group of applicants. Her two-year term began on January 1, 2022.

As Philadelphia’s sixth Poet Laureate, Airea D. Matthews embodies the collaborative and maverick spirit of Philadelphia’s literary community. Reading or listening to Airea’s work is an embodied experience, where language is a thick, sinewy, and fierce offering. Airea is a poet who is unafraid of the shadows or strangeness of questions. Her work experiments with the edges of narrative and embraces the complexities and joy at the center of a life of poetry. Her poems seem to beg the question of what a poem is, what shape it can take, and what music it can invent.

Airea received her BA in Economics from the University of Pennsylvania. She also holds an MFA in Poetry from the Helen Zell Writers’ Program at the University of Michigan, and an MPA in Social Policy from Gerald R. Ford School of Public Policy at the University of Michigan. Airea currently directs the Creative Writing Program at Bryn Mawr College where she is an Assistant Professor and is part of the graduate faculty of Warren Wilson MFA Program for Creative Writers. She is also a Visiting Professor and Scholar at Rutgers University in the Institute for the Study of Global Racial Justice. Airea is the mother of four children, one of whom is Wes Matthews, a former 2018-2019 Philadelphia Youth Poet Laureate.

Airea's book Simulacra won the 2016 Yale Series of Younger Poets. Her poetry has appeared in Best American Poets 2015, Harvard Review, Los Angeles Review of Books, American Poet, The Rumpus, Callaloo, and Tin House. Matthews has received a Rona Jaffe Foundation Writers' Award, a Louis Untermeyer Scholarship in Poetry from Bread Loaf Writers’ Conference, and fellowships from the Pew Center for Arts and Heritage, Cave Canem, Callaloo, the James Merrill House, and Kresge Arts in Detroit. Philadelphia is fortunate to have a laureate with such an esteemed local and national reputation.

Housed at the Free Library since 2017, the City of Philadelphia’s Poet Laureate Program recognizes exceptional poets who also demonstrate commitments to the power of poetry to engage and inspire people throughout Philadelphia’s neighborhoods. This civic position comes with a $5000 stipend and support for a community-based project. Airea will also mentor and work closely with the current Philadelphia Youth Poet Laureate, Andre’a Rhoads.

Each new laureate adds a thread to the powerful fabric of Philadelphia’s lineage of civic engagement through poetry. Outgoing laureate Trapeta Mayson enlivened the arts and culture sector of Philadelphia with her readings, workshops, and community programs in 2020 and 2021. In the midst of the pandemic, she created the Healing Verse Phone Line (1-855-POEMRX2 ), a year-round phone line featuring a new poem every week by a Philly-connected poet centering on mental well-being. The project was featured in a film directed by Glenn Holsten for OC87 Recovery Diaries, "an interactive website that features stories of mental health, empowerment, and change." She collaborated with Philadelphia Youth Poet Laureate Andre’a Rhoads on the poem "Letter to My Older/Younger Sister", which was featured by Philadelphia Contemporary on a billboard at The Rail Park. Trapeta also partnered with the PA Humanities Council on the PA Kindness Poem Project, which invited residents to share messages on social media that promote kindness. Trapeta created an original poem released on World Kindness Day 2021 based on these messages. Trapeta also collaborated with the Philadelphia Water Department to lead poetry-infused workshops in Germantown about flooding and plans to install public rain art throughout the city. Recently, Trapeta facilitated Healing Verse workshops in partnership with Mural Arts Philadelphia with East and West Kensington residents, students, and individuals impacted by substance abuse and housing insecurity. The workshops led to the creation of a collective community poem, "our story of us," which will be displayed as a neon sign on a Kensington Avenue rooftop. In recognition of her work, the Academy of American Poets awarded Trapeta a Poet Laureate Fellowship, a prestigious national honor.

Raquel Salas Rivera, who served as laureate in 2018 and 2019, also received a Poet Laureate Fellowship from the Academy of American Poets for his work in Philadelphia. Raquel read at more than 100 venues during his two-year term, led dozens of writing workshops, and organized a number of community events focused on Puerto Rico and the Puerto Rican diaspora. With Ashley Davis and Kirwyn Sutherland, Raquel co-curated We (Too) Are Philly, a six-part summer poetry festival that centered around poets of color performing in shared creative spaces around the city. This year, with Boston Poet Laureate Porsha Olayiwola as a collaborator, Raquel organized Home on Our Back: A Laureate’s Reading on the Poetics of Diaspora, which brought poets from Boston and Philadelphia together in the Free Library’s Heim Center to explore how migrations have shaped our two cities.

Philadelphia’s poetry scene is part of its heartbeat and is gaining recognition across the country. We have even more to look forward to in 2022 with the start of Airea’s term as Poet Laureate. If you are interested in inviting Airea to read, please contact poetlaureate @ freelibrary.org.

4 Comments | Add a Comment
CONGRATULATIONS Airea!
Pat McLean-Smith - Philadelphia
I remember when she came into the prison and taught us poetry and spoken word it was one of the best experiences I ever had it taught me how to use my words and to dig deeper into a life that I never knew existed ! I'm so proud of you chick congratulations you deserve it
Falkner Angela - Garfeild
Poetic ways / poetic tales/ poetic being/ poetic spheres... Congratulations !!!! JTR
James thomas romano - New York City
I am 64 years old and did not appreciate poetry's ability to express and articulate pain, joy, and resilience until I heard Amanda Gorman speak. I then began to embrace poetry as an outlet for all I, my family, and our country has endured during the last 4-6 years. Thank you!
Jo - Jackson, Mi.