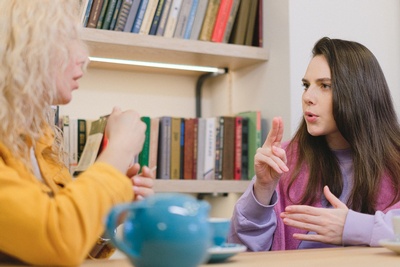 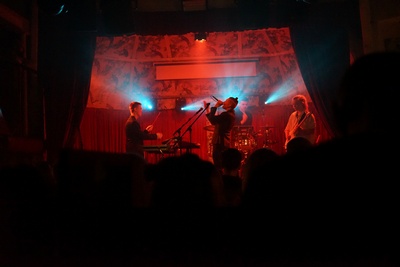 Rock concert at the Deaf Institute in Manchester.

Note: the use of "deaf" versus "Deaf" in this blog post is intentional. Deaf refers to the community and culture, while the lowercase deaf refers to the physical act of not being able to hear.

Deaf Culture has a rich and storied history, from the evolution of American Sign Language to residential schools, and the Deaf President Now movement.

Here are some selections from our collections during Deaf History Month, about the history of the American Deaf community, featuring Deaf and Hard of Hearing people and characters. 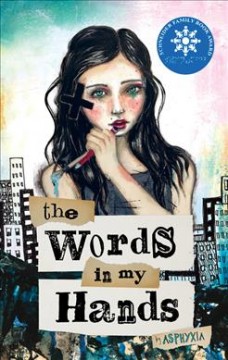 The Words in My Hands by Asphyxia

This mixed-media young adult novel—told through a mix of collage, paint, drawings, and prose—tells the story of Piper, a deaf teenager in a near-future dystopic Australia where resources are scarce. Her mother has paid top dollar so Piper can speak, lip-read, and "pass for hearing to get a nice job," but Piper still struggles to navigate the hearing world without help from her family. Everything changes when she meets Marley, a CODA (Child of Deaf Adult) who introduces Piper to the Deaf world, where Piper can be herself and learn the value of community and collective action.

On the Beat of Truth: A Hearing Daughter's Stories of Her Black Deaf Parents by Maxine Childress Brown

The memoirs of Maxine Childresss Brown, a CODA (Child of Deaf Adult) who tells the story of growing up with her parents, Herbert Childress and Thomasina: both Black and Deaf during the Civil Rights Era. Through her memoirs, we get a look into Black Deaf culture and history and tales of two dedicated parents working hard through adversity to earn a modest living for their family. 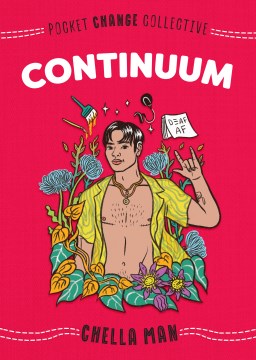 A short and sweet pocket-sized coming-of-age memoir by artist, activist, and actor Chella Man. Chella Man is Deaf, genderqueer, transgender, Jewish, and mixed race. He discusses unlearning prejudiced social constructs, coming to terms with various identites, and how all of his identities exist along a "beautiful, messy, ever-evolving road of exploration." Of particular focus is his relationship to his mother: who is white, cisgender, and hearing. 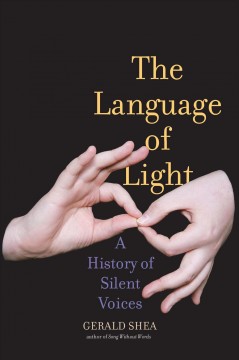 The Language of Light: A History of Silent Voices by Gerald Shea

Gerald Shea, who is hard of hearing, chronicles the struggle of the Deaf community to access education in their own languages: Sign languages. This eloquent, accessible, and thoroughly-researched history covers signed languages and Oralism: the movement among hearing educators who insisted that Deaf people be exclusively taught in spoken languages which they could neither hear nor speak with ease; and the history of Deaf resistance to Oralism. Shea makes a strong case for the value of signed languages as full languages which allow Deaf and hard of hearing people to fully express themselves.

Through Deaf Eyes is a full-length documentary on Deaf history produced by Deaf people through Gallaudet University Press. Gallaudet University is the largest university that is specifically for Deaf and hard of hearing people, with classes taught entirely in American Sign Language and written English.