Poet of the Week | John Ashbery

John Ashbery has written more than twenty books of poetry and won nearly every major American prize for poetry, including a Pulitzer Prize, a National Book Critics Circle Award, and a National Book Award. His most recent publication, A Worldly Country, was published this year. Ashbery is currently the Charles P. Stevenson, Jr., Professor of Languages and Literature at Bard College.

Something was about to go laughably wrong,
whether directly at home or here,
on this random shoal pleading with its eyes
till it too breaks loose, caught in a hail of references.
I’ll add one more scoop
to the pile of retail.

Hey, you’re doing it, like I didn’t tell you
to, my sinking laundry boat, point of departure,
my white pomegranate, my swizzle stick.
We’re leaving again of our own volition
for bogus patterned plains streaked by canals,
maybe. Amorous ghosts will pursue us
for a time, but sometimes they get, you know, confused and
forget to stop when we do, as they continue to populate this
fertile land with their own bizarre self-imaginings.
Here’s hoping the referral goes tidily, O brother.
Chime authoritatively with the pop-ups and extras.
Keep your units pliable and folded,
the recourse a mere specter, like you have it coming to you,
awash with the new day and its abominable antithesis,
OK? Don’t be able to make that distinction. 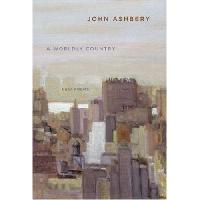 John Ashbery's latest book
1 Comment | Add a Comment
Nice read. Just to add, John has actually won every single American poetry award there is to win. Although he has also won a Pulitzer award, most of his work remains controversial to this day. And if that's not enough, then he has already been compared to T.S.Eliot by some academicians.
Inflatable Kayak -