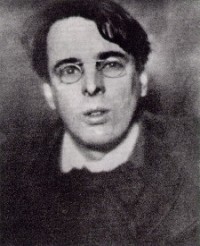 W.B. Yeat's "The Second Coming" was featured prominently in this past Sunday's episode of The Sopranos. Because it is so rare for a poem to appear on pop culture's radar, we decided to feature Mr. Yeats as Poet of the Week.

Yeats is considered to be one of the most important literary figures of the 20th century. He was fascinated by mysticism, occultism, and hermeticism. The contrast between the physical and the spiritual figured heavily in his early work. Although he was a master of traditional poetic forms, he experimented with free verse. As his work developed, many poetic conventions fell by the wayside and were replaced by increasingly spare language. Yeats also wrote plays and co-founded the Abbey Theatre. He served as an Irish Senator and won the Nobel Prize in Literature in 1923.

Turning and turning in the widening gyre
The falcon cannot hear the falconer;
Things fall apart; the centre cannot hold;
Mere anarchy is loosed upon the world,
The blood-dimmed tide is loosed, and everywhere
The ceremony of innocence is drowned;
The best lack all conviction, while the worst
Are full of passionate intensity.

Surely some revelation is at hand;
Surely the Second Coming is at hand.
The Second Coming! Hardly are those words out
When a vast image out of Spiritus Mundi
Troubles my sight: somewhere in sands of the desert
A shape with lion body and the head of a man,
A gaze blank and pitiless as the sun,
Is moving its slow thighs, while all about it
Reel shadows of the indignant desert birds.
The darkness drops again; but now I know
That twenty centuries of stony sleep
Were vexed to nightmare by a rocking cradle,
And what rough beast, its hour come round at last,
Slouches towards Bethlehem to be born?