Poet of the Week | Stanley Kunitz

Stanley Kunitz was born in Massachusetts in 1905. He attended Harvard University, eventually serving during World War II when his conscientious objector status was denied. After returning from duty, he taught at Bennington College, and later at Columbia, Yale, Princeton, Rutgers, and the University of Washington. Kunitz’s first book, Intellectual Things, was published in 1930. During his long and successful writing career, he won numerous awards, among them the Bollingen Prize, a Guggenheim Foundation fellowship, a senior fellowship from the National Endowment for the Arts, the National Medal of the Arts, and a Pulitzer Prize. In 2000, he was named United States Poet Laureate. Kunitz’s life revolved around writing and gardening. He died in 2006 at the age of 100.

My mother never forgave my father
for killing himself,
especially at such an awkward time
and in a public park,
that spring
when I was waiting to be born.
She locked his name
in her deepest cabinet
and would not let him out,
though I could hear him thumping.
When I came down from the attic
with the pastel portrait in my hand
of a long-lipped stranger
with a brave moustache
and deep brown level eyes,
she ripped it into shreds
without a single word
and slapped me hard.
In my sixty-fourth year
I can feel my cheek
still burning. 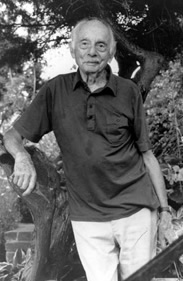