John Updike Has Won Every Award Ever

OK, maybe not every award ever, but he's won quite a few awards of the literary variety, including the National Book Award (twice), the PEN/Faulkner Award, the Pulitzer Prize, and the National Book Critics Circle Award, just to name a few. With 20-plus novels and more than a dozen short story collections under his belt--as well as collections of poetry, literary criticism, even children's books--John Updike is undeniably prolific. He'll be here at the Central Library's Montgomery Auditorium on Wednesday, June 6 at 7:00 p.m. to discuss his latest novel, Terrorist, which tells the story of Ahmad Ashmawy Mulloy, a 21st century New Jersey high school student and self-described “good Muslim in a world that mocks faith,” whose sights are set on martyrdom through a terrorist act.

This event is free; no tickets required. 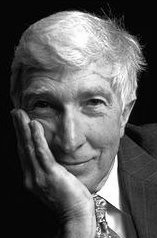