Poet of the Week | Robert Hass 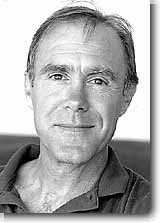 Robert Hass grew up in San Francisco and was a huge fan of the 1950s Bay Area poets, among them Gary Snyder and Allen Ginsburg. In 1973, Hass' book Field Guide was selected by Stanley Kunitz for the prestigious Yale Younger Poets Series. From 1995 to 1997, Hass served two terms as Poet Laureate of the United States. As part of this post, Hass traveled to unpoetic locations, such as boardrooms, giving lectures on everything from poetry to ecological awareness. Hass has also co-translated works by Czeslaw Milosz alongside Milosz himself as well as fellow former Poet Laureate, Robert Pinsky.

When the swordsman fell in Kurosawa's Seven Samurai
in the gray rain,
in Cinemascope and the Tokugawa dynasty,
he fell straight as a pine, he fell
as Ajax fell in Homer
in chanted dactyls and the tree was so huge
the woodsman returned for two days
to that lucky place before he was done with the sawing
and on the third day he brought his uncle.

They stacked logs in the resinous air,
hacking the small limbs off,
tying those bundles separately.
The slabs near the root
were quartered and still they were awkwardly large;
the logs from midtree they halved:
ten bundles and four great piles of fragrant wood,
moons and quarter moons and half moons
ridged by the saw's tooth.

The woodsman and the old man his uncle
are standing in midforest
on a floor of pine silt and spring mud.
They have stopped working
because they are tired and because
I have imagined no pack animal
or primitive wagon. They are too canny
to call in neighbors and come home
with a few logs after three days' work.
They are waiting for me to do something
or for the overseer of the Great Lord
to come and arrest them.

How patient they are!
The old man smokes a pipe and spits.
The young man is thinking he would be rich
if he were already rich and had a mule.
Ten days of hauling
and on the seventh day they'll probably
be caught, go home empty-handed
or worse. I don't know
whether they're Japanese or Mycenaean
and there's nothing I can do.
The path from here to that village
is not translated. A hero, dying,
gives off stillness to the air.
A man and a woman walk from the movies
to the house in the silence of separate fidelities.
There are limits to imagination.