Alison Bechdel is best known for her long-running, syndicated comic strip Dykes to Watch Out For, which she first began working on in the early 1980s. Her bestselling memoir in graphic novel form, Fun Home, was published last year to critical acclaim from both within and beyond the GLBT and comics aficionado communities. Ms. Bechdel will be appearing here at the Central Library’s Montgomery Auditorium on Tuesday, June 26 at 7:00 p.m. (This event is free; no tickets required.) She took a few moments to chat with us about some of our favorite topics.

Libraries have played a critical role in my life. I certainly remember my mother taking me to get my first library card, at the Ross Library in Lock Haven, PA. I was probably five or six, but even then the whole scenario--that I could just take whatever books I wanted--struck me as wondrously counter to most of the rules I had learned so far about life.

But I didn't fully appreciate libraries until I was in college, and coming out as a lesbian. The books I found after realizing I could just look up "homosexuality" in the card catalog were life-altering, if not life-saving.

What made you think you could be a writer?

Harriet the Spy. Not at the time--as a kid I just knew I loved that book. But when I got older and realized that it was a book about the pleasures and difficulties of writing, and about writing as a necessary activity, I could see that on some deep level it had gotten woven into my sense of who I was.

Who are the three authors you think everyone should be required to
read--which books would you start with?

Oh, God. I would never require anyone to read anything. In fact, as soon as someone tells me I have to read something, no matter how excited they might be about it, that book now possesses a force field that prevents me from ever opening it.

My dad was always trying to get me to read particular books. You would think that would be a great thing for a kid, but he was so proprietary about these novels--The Adventures of Huckleberry Finn, The Catcher in the Rye, A Portrait of the Artist as a Young Man--that it took some of the pleasure away when I finally read them. It was like he'd already colonized these places, and I was there on his terms.

I'd like to be a reference librarian. And I'm not just sucking up because this is a library quiz. I've given this a lot of thought over the years. My work study job in college was at the circ desk in the library, and I was really good at it. I scored even higher that my boss on some crazy test we had to take, matching long columns of letters and numbers. And it made me ecstatically happy to be able to help someone find something. Really, it was weird how good that made me feel. 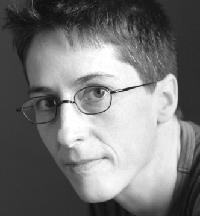