Poet of the Week | Eamon Grennan

Eamon Grennan was born in Dublin in 1941; however, he has lived in the United States for over thirty years and has taught at Vassar College since 1974. Grennan has won numerous awards--among them the Lenore Marshall Award, several Pushcart Prizes, a PEN Award for Poetry in Translation, as well as honors from the National Endowment for the Arts, the National Endowment for the Humanities, and the Guggenheim Foundation. He publishes regularly in the Nation, the New Yorker, the New Republic, and the Threepenny Review.

Through an accidental crack in the curtain
I can see the eight o'clock light change from
charcoal to a faint gassy blue, inventing things

in the morning that has a thick skin of ice on it
as the water tank has, so nothing flows, all is bone,
telling its tale of how hard the night had to be

for any heart caught out in it, just flesh and blood
no match for the mindless chill that's settled in,
a great stone bird, its wings stretched stiff

from the tip of Letter Hill to the cobbled bay, its gaze
glacial, its hook-and-scrabble claws fast clamped
on every window, its petrifying breath a cage

in which all the warmth we were is shivering. 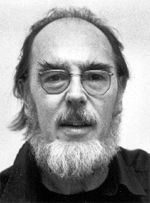