Charles Bock’s debut novel, Beautiful Children, is a sweeping portrait of a depraved Las Vegas--from the bland misery of the suburbs to the explosive and exploitative sex industry--through the eyes of a runaway boy. The Washington Post writes, “[Bock’s] ability to share a deep understanding of America’s million or so lost street kids and their tormented parents give the book a whiff of greatness.” One of many critically acclaimed authors who will be appearing at the Parkway Central Library during the second annual Philadelphia Book Festival on Saturday and Sunday, May 17 and 18, 2008, Mr. Bock recently took a moment to chat with us about some of our favorite topics.

When I was a child, my mother used to drive me and my siblings to the main branch of the Vegas library, on Flamingo. We used to head upstairs and spend hours after school reading in the kid’s section, and would take breaks to go down to the candy and soda machines. I remember that we all used to sit underneath the stairs and play cops and robbers and cowboys and indians, hiding from the people who went up and down the stairwell. I actually used some of those memories in a scene in my novel, Beautiful Children. But libraries were a huge influence on me early. Even now they still play an important role for me in all kinds of different ways, including but not limited to research.

I read each installment of the Encyclopedia Brown series so many times that I pretty much knew all the mysteries by heart.

That’s tough. Maybe Yossarian from Catch-22. He brought me tons of joy in that novel, and meanwhile had a backbone and a sense of what was right. Ask me tomorrow; I'll probably say someone else is my favorite fictional character, but for today, let’s go with him.

Who are three authors you think everyone should be required to read--what books would you start with?

Honestly, I think the question has a flawed premise. So many variables go into what kind of book is going to affect a person, including the given moment/phase in a person’s life when they read that particular book, or are exposed to that particular author. I can’t answer in any kind of definitive way. But here’s three books I love and which anyone reading this should go and check out. 1) The Dirt, Motley Crue with Neil Strauss. 2) The Known World, Edward P. Jones. 3) Purple America, Rick Moody. 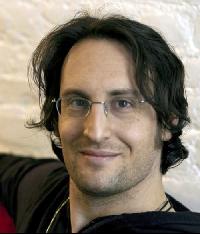