The biggest question to hit the literary world since "Does Harry die?!" is "Will Edward and Bella have a happy ending?!"  And thankfully, we don’t have to wait much longer to find out.  As I type, it’s about 11 hours and 49 minutes until Breaking Dawn hits the shelves.  But who’s counting, right?  Stephanie Meyer Mania has hit and if you haven’t noticed, it’s likely you are living under a rock or purposefully avoiding all media outlets.  As an avid fan, I’ve watched nearly every trailer on YouTube for the Twilight movie, but avoided reading any spoilers for Breaking Dawn because I don't want to ruin it for myself.

If you don’t know what I’m talking about or who Edward and Bella are, you have some catching up to do.  Here’s the three run-on sentence summary of the first three books of Stephenie Meyer’s Twilight Saga:

Bella moves to Forks, Washington to live with her father and transfers to the local high school where she meets Edward, who is the hottest thing since toasted bread and who, interestingly enough, is a vampire of the non-human eating variety, living with his family nearby and of course Edward and Bella fall madly in love, much to the chagrin of her best friend (and werewolf) Jacob, who is also in love with Bella and is by (werewolf) nature, a sworn enemy of vampires.  Bella, clumsy, but endearing heroine that she is, gets herself into all kinds of trouble with not-so-friendly vampires, which Edward saves her from repeatedly.  Bella wants nothing more than to be with Edward forever through becoming a vampire herself, but Edward, and Jacob think this is a bad idea, which is where we are now, eagerly awaiting Breaking Dawn.

I have to admit, I tried to use my Librarian Connections to get a copy of Breaking Dawn before it hit the shelves.  But this book is locked up tighter than Fort Knox.  So I’m waiting like the rest of you to find out the fate of Bella, Edward, Jacob and everyone else I’ve come to know in Forks.

The only real question I anticipate having after I turn the last page of the book’s 768 pages is, What am I going to do now that it’s all done??

Want to catch up or reread her other books?  Find Stephenie Meyer at the Free Library!

And if you haven’t done it already, place your hold now; copies are expected to hit library shelves Monday or Tuesday due to a shipping snafu.  (Sorry!!) 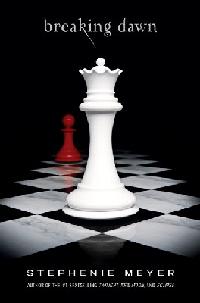 Breaking Dawn
42 Comments | Add a Comment
Liz, you inspired me to reserve the book!
Laura - Center City
Laura, if you haven't read the others, you should definitely start at the beginning with Twilight. Enjoy!
Liz - Center City
I just finished reading Breaking Dawn... outstanding!
David - Ardmore
I agree this is simply a fantastic book, a must read!
Clean Red Widgets - Lancaster
Who doesn't love a little high school drama?
pyngthyngs - Squid Links
Dracula is not in this book ?
Forare - Romania
Dracula is not in this book ?
Forare - Romania
True to form, Meyer surprises us with a few twists in this final book. I walked away happy, and I think most readers will too.
- New York
Hi, I just finished reading your interesting article. I have to say, that I absolutely agree. Very well written. Thanks.
Werbeagentur -
Hi, I just finished reading your interesting article. I have to say, that I absolutely agree. Very well written. Thanks.
Werbeagentur -
Wow you have inspired me to read the book. Thanks!
Pergola Plans
Chris - Portland, Oregon
I enjoyed reading your posts.You shared information that is valuable to me and some other readers. Keep posting as I will be visiting this page from now on. Cheers.
Avery - USA
I can't argue more with you That book is really wonderful
Jack - http://wiirepair.co.cc
Great Blog
scooter motorcycles - orlando
i'm on eclipse right now and this book is sooo wonderful i just can;t wait until the movie comes out I'm a big FAN of twilight!!!
alice - clarks
yes this book is a really good read, i liked it alot
get rid of zits - california
awesome book-definetly recomend [url=http://www.thecbpredator.com/]cb predator review[/url]
cb predator review -
this book is simply a masterpiece "Lose Weight Really Fast":http://www.loseweightreallyfastinformation.com
alicia -
this book i have not read, but i will put it on my list for sure
lean hybrid muscle review - http://www.leanhybridmusclereview.net
Great post very informative
- Canada
Great post very informative
- Canada
Great post very informative http://losemanboobtoday.com/
- Canada
Go team Edward!
Jeff - Philadelphia
I like team Edward!
regcure - pittsburgh
Great post
Man Boobs - Edmonton
Hello Great article I came across it on Google. I just recently created a new website www.callawaybag.net Its about Callaway bags . It would be great if you could check it out I really need some feedback on it. Thanks!!
Alfagirl101 - New york
Hey Great article. This is a little off topic but im current making a website on Electronic Design I was just wondering what theme you are currently using for your website .Thanks
Jay - http://www.eetimes.com/
Vous cherchez un mec mignon, sympa et charmeur ? Qui soit sur la même longueur d'onde que vous ? Venez consultez toutes les annonces sur Mignonne.com, vous trouverez certainement votre bonheur. Et le site est entièrement gratuit pour vous les femmes. Contactez qui vous voulez et répondez à tous vos messages gratuitement.
Frankel - http://www.mignonne.com/
That was a great book, thanks.
- England
One of the better reads - -
Jeff - South Philly
One of the best read I've had in a long time
Kim
thumbs up!this site is great.The information and the detail are perfect.
Alfin fikri -
Love the blog and article...would you mind if I talk about this on my blog? http://www.getgirlfriendbackblog.com
get girlfriend back -
I actually like the third book the best. The first one was interesting but not as complete as the third installment in my humble opinion.
-
I actually just like the third book the best. The primary one was interesting however not as complete because the third installment in my humble opinion. Paul@ http://www.leafletsareus.co.uk/
Paul - South Philly
I haven't really figured out drag-drop yet... but this post is very worthwhile. Thanks for posting it! Thanks From Team
Suresh Jacob - califarnia
Cars and houses are not cheap and not every person is able to buy it. However, was invented to help people in such kind of cases.
Robyn19Mann - US
When you are in the corner and have no cash to go out from that, you would have to receive the . Because that would aid you unquestionably. I get college loan every year and feel fine just because of it.
BirdJILLIAN31 - US
Don't you understand that it is the best time to receive the mortgage loans, which will help you.
BlackwellShawn - US
interesting subject http://www.pergolasjoan.es
- madrid
i think she should end with both of them
Geo Forescu - Germantown