An exciting addition to our reference collection is making its way onto shelves around the city: the multi-volume African American National Biography, published by Oxford University Press and edited by Henry Louis Gates and Evelyn Brooks Higginbotham.  This is the largest research project in African American Studies to be completed or published in over 20 years, according to a Library Journal Article (1/15/2008 "Behind the Book—First of Its Kind: African American National Biography"). The project was a massive undertaking that brings together the work of over 1000 scholars who researched and wrote over biographical 4000 entries.

The scope of this reference work spans 500 years of African American life, including entries about historical figures, according to Dr. Gates, "who already have a place in the historical record, even if only just a few words." These thousands of lives span eight volumes that include previously uncollected information, especially about women and the roles they played on the local level in defying segregation laws and registering new voters. The immensity of this project means that we can read about the lives of hundreds of historical figures whom previous publishers had to leave out because there was not enough information about them or because there was not space to include them.

Some of the entries feature photographs of the subject, and all of them include citations for further reading and research. Take a look through the African American National Biography, where you can read about African Americans from Aaron (a former slave from Virginia who became an antislavery lecturer who toured New England) to Paul Burgess Zuber (a lawyer who represented cases that established legal precedents against segregation) and crucially, the thousands of lives in between.

The AANB is on the reference shelves at Parkway Central, Blackwell Regional, Northeast Regional, Holmesburg, Kingsessing, Logan, and Wynnefield. 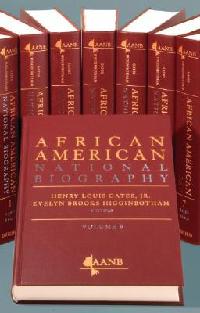 African American National Biography
16 Comments | Add a Comment
That's an absolutely fascinating read. Highly recommended. Kay Africa Honeymoon
Kay - Cape Town, South Africa
ggg
ggg - Africa Honeymoon
as worn by African Americans.
Ruth - Durban
Wedding Dresses as worn by African Americans
Ruth -
Great book <a title=wedding dresses Ηref=http:⁄⁄www·weddingwire·co·za⁄>
Wendy - South Africa
Does anyone know where in one could find this book?
Jim - Cape Town
I found this book at one of the
Jim - Cape Town, South Africa
Jim - Cape Town
nice book! http://www.cometocapetown.com
Ben - South Africa
AANB is a major new standard reference work that most libraries of any size will want to have.
Andy - New York
joy -
Fascinating though it is: and laudable the effort certainly is - you wonder how well any such biography can be represntative of a people whose history was supressed - and documented by only a few. Mike at
Mike - UK
Excellent Book, good read!
Lisa - Australia
This book is amazing as it has 500 years of African American life. You can tell this took a long time to put together. Job well done!
Mike - California
Great book, I'll buy it if I got spare cash :)
- New York
David -
"HOLD ME ACCOUNTABLE". http://www.TabsOnObama.org HAD ENOUGH!!!! http://www.Toomey.Senate.gov
BARACK OBAMA - FUMO
"HOLD ME ACCOUNTABLE". http://www.TabsOnObama.org HAD ENOUGH!!!! http://www.Toomey.Senate.gov/HadEnough
BARACK OBAMA - FUMO