Booklovers across the world mourned the death of contemporary American writer John Updike on Tuesday, January 27. The author, who counted the award-winning Rabbit series among his bestsellers, died following a battle with lung cancer.

Born in Reading, Pennsylvania, and raised in nearby Shillington, Updike graduated from Harvard University on a full scholarship, where he edited the Harvard Lampoon. Updike, who often set his stories in suburban, postwar America, was praised from the start for his writing, which appeared regularly in The New Yorker. Frequenting bestseller lists and winning numerous writing awards (two Pulitzers, two National Book Awards, and a PEN/Faulkner Award among them), the writer showcased his talent across a variety of writing styles—novels, short stories, poems, criticism, essays, and memoir.

In remembrance of this literary great, listen to a podcast from his visit to Parkway Central in June 2007 or check out one of our many books penned by him.

Which of Updike’s books have you read? What will you remember best about his work? 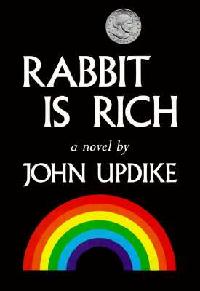 One of Updike's Pulitzer Prize-winning books
7 Comments | Add a Comment
Hello I am president of the Friends group at the Oak Lane Library. I have placed on display in the Oak Lane Free Library, 12th and Oak Lane, my collection of books by John Updike, including all 50 novels, and almost all of his poetry books, children's books, short stories, essays, books for which he wrote forwards, and a set of books about John Updike, ie literary criticism. All are welcome to come and inspect the exhibition.Regards, T Michael Poxon, President of the Friends of the Oak Lane Branch of the Free Library of Philadelphia
T Michael - Example: Philadelphia
This is a sad time with the loss of such a great Author and man. I remember reading the book and the profound effect it had on me. My Thoughs and best wishes to Mr updikes family.
Ed - Philadelphia
HI MY NAME IS GWENDOLYN I LOVE THE LIBARY OF PHILADELPHIA PA WE NEED TO WORK ON SAVING ALL LIBARYS HAVING FUN RAISERS PLANNING TRIPS JUST HAVE FUN I WAS ON LOGAN BRANCH SAVING THE LIBARY LOOK IT UP ON THE INTERNET
GWENDOLYN MEADE-PEPPLES - Example: Philadelphia
Its kinda sad, I love John Updike. May his soul rest in peace.
. - Philadelphia
Wow I didn't realize he passed away, that's very sad. He was a fantastic author.
- Philadelphia
He was a great writer. Rest in peace.
L - Georgia
The Witches of Eastwick struck a particular chord with me when I was a child Updike showed great talent and flair.
Richard - London