One Film Kicks Off!

Calling all movie lovers! A special opening night screening at Moore College of Art and Design tonight at 7:00 p.m. marks the official start of the second annual One Film program. Through March 11, Philadelphians are encouraged to watch Basquiat, a film based on the life of artist Jean-Michel Basquiat. Directed by Julian Schnabel, the movie follows the young graffiti artist through the ups and downs of the ’80s art scene in Manhattan. As he transitions from graffiti art to more conventional art, Basquiat allows himself to be seduced by the promise of fame, only to win it at the cost of his life.

In the coming weeks, community members are invited to dozens of events—screenings, discussions, dinners, readings, and panels—and are encouraged to draw connections between Basquiat and The Soloist, the featured selection of partner program One Book, One Philadelphia. Check out the extensive resources our staff has gathered to further your viewing experience, and search our One Film event guide. Have you seen the film already? Leave a comment below—we’d love to know what you liked (or didn’t like) about the film!

For more information about this evening's program, please click here. 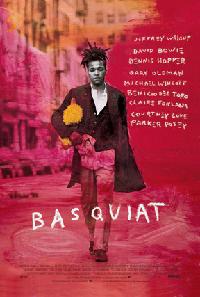 Basquiat
26 Comments | Add a Comment
Ill be there at the ceremony
Matt - Boston
Nice....would love to be part of that..
Kody - texas
This is a Great News...Interesting been posted here
James - Example: Philadelphia
So what does Basquiat actually mean?
Ed - UK
This is a great movie, and really quite sad. He starts out as a graphiti artist, but ends up doing more commercial work, and what that does to him
Mary - Example: Philadelphia
Basquiat was a really talented artist and this film is an enjoyable accurate biography. Enjoy Ralph DeLuca
Ralph - Madison, NJ
[...Basquiat was a really talented artist and this film is an enjoyable accurate biography...] That's right, really like this film from Julian Schnabel. Rgds Peter
Peter Prozessor - Germany
Nice film i think
Melayu Boleh - Malaysia
I don't envy anyone the task of writing a screenplay about the short life of a not-universally known person, someone who was basically a strung-out junkie, overall a jerk of a guy, and whose sole talent was making what, in limited circles, must pass for avant-garde art. However, Julian Schnabel has taken this challenge, and in most regards, has failed, coming up with a self-indulgent work that captures what's going on in Schnabel's head, and that's about it. Basquiat's life is, from the start of the film to the finish, succinctly described by the first sentence of this paragraph -- little more than an wacko that was hyped into the big time. Not that that's suprising. It happens even more often today. It just doesn't deserve a movie. Vegetables Garden
. - Philadelphia
nice site and good design http://spoilersinfo.com
David - New York
I am a very good movie thanks ederim.Bu released film blog www.filmizlex.org
film izle - turkey
This is a great idea
Festmény - Philadelphia
Actually I do not really like watching movies. Good article, thanks for sharing.
Joe - Indo
Nice movie
Paul Potts - UK
hope to see more soon http://www.coloncleansetablets.com
paul potts - UK
This is a great movie! I agree that there should be another similar event in the near future.
Bob Davis - San Francisco
I'll look forward to your forthcoming updates. http://www.getyourexgfbackblog.com
Bob Davis - San Francisco
The movie indeed gave justice to Basquiat's life story. Thank you for sharing. http://www.gsneakreview.co.uk
Sarah Johnson - VA
Nice article on the movie I like.
lokanath - Bhubaneswar
I like this article http://filmsonlinefree.org/
filmsonlinefree -
Does anyone know if this movie program is still going on? http://lastreporter.com
ced -
Like the comment before mine, any word if this program is still alive? http://hvac-trainingclass.com
Brazil Johns - South Philly
He died for his passion
ashley - newport
This man was gifted. He learned to read and write by age 4. He was speaking 3 languages by age 11, English, Spanish and french. If you have never seen this movie I am not going to ruin it for you, I will say that he led an extraordinary life. Watch the movie he truly was amazing.
rice krispie treats - alabama
amazing movie. amazing man.
E l james - alabama
E l james - alabama