Parkway Central: Then and Now

I may not be a bona fide history nut—I certainly don’t know who was the fourth King of England—but I can spend hours poring over photographs and historical accounts of places I’m familiar with in present-day. Take the Parkway Central Library for example—there’s a certain level of nostalgia and intrigue that surrounds the history of a library, and Parkway Central doesn’t fall short. As media and technology (and the way we access them) evolve throughout the years, so does our Library.

Explore history hands-on and roam the halls of Parkway Central Library. Many departments display photographs of the original space, allowing visitors to study the differences that have shaped the departments over the years. I recommend starting your self-guided tour with a stop in Philbrick Popular Library, a bustling room full of new releases, DVDs, and popular literature. Then check out the "then and now" poster that shows the room how it once was—a sparse periodical space with dozens of heavy metal tables and chairs!

For a historical account without walking the halls, visit the digital collections the Free Library developed to celebrate the building’s 75th anniversary in 2002. Choose from blueprints, photographs, a timeline, and more in the 75th anniversary archives and explore the Parkway Central of the early 20th century.

Stone carvers working on the exterior. 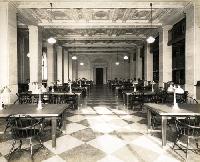 The outdoor space on the fourth floor has changed, but the view of City Hall remains!
4 Comments | Add a Comment
real nice
Doris - Northeast
No one is universally recognized as the first King of England, so don't feel bad that you don't know who the 4th one is since nobody agrees anyway! ;-) Nate
Nate - Taunton, MA
nice post, there is a great resource of history images on the following website. http://www.historyimages.com/ You can find a lot more on history images on
Howard - Chicago