Music the soundtrack of our lives

Philadelphia is a big music town, and we are home to many musical talents such as opera singer Marian Anderson, pop sensation Frankie Avalon, jazz legends John Coltrane, Grover Washington and Rufus Harley, songwriters G. Love and Amos Lee,  R&B groups The Delfonics, Hall and Oates and Boyz II Men as well as hip hop artists Will Smith,  DJ Jazzy Jeff and The Roots to name a few.

In Philly, music is in our bones, and the death of pop music icon Michael Jackson was felt throughout the city. I can personally remember my first introduction to Michael Jackson’s music. I was sitting on the floor, five inches away from the television, watching the “world premiere” of the Thriller video. I was a bit too young to fully understand everything going on, but I can distinctly remember the excitement around me and knew he was doing something unique.

On June 25, when the news of Michael Jackson’s death hit the airwaves, journalist and author Farai Chideya was at the Parkway Central Library to discuss her debut novel, Kiss the Sky, which chronicles the ups and downs of a black female rocker attempting to make a musical comeback amidst struggles with love, friendship, and faith.  She spent the first part of her talk discussing Michael Jackson and celebrity. You can listen or download the podcast here (or subscribe to our podcasts via iTunes).

The Parkway Central Library's Music Department also provides many resources for music lovers. Here are some quick facts you might not know about our music department: 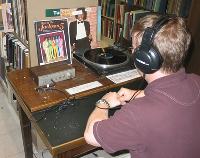 A patron listening to an LP on one of our turntables 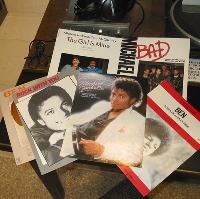 A couple of Michael Jackson's music sheets in our collection 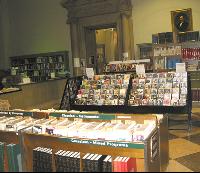 Michael Jackson is alive because his energy and love and talent can't be destroyed. The world is leaning toward war for profit and being hateful of other races, credes and religions. But Jackson proved you can represent caring for people and still appeal to fans around the world.
Edward - Oakland Fri, July 03, 2009
Wow, great collection in Music Department. I wish Michael Jackson rest in peace he never had =)
Brendan - Los Angeles Sat, July 04, 2009
In the South, music is in our bones as well. Who doesn't enjoy music? Some people play and blow on harmonicas while others bring you to tears with the violin or sax - but it's all music that comes from our souls.
Linda - Georgia Thu, July 09, 2009
I enjoy music and dance. I am a Bboy, to a Bboy music is life. I also remember when I first saw the Michael Jackson Thriller music video. I was a kid and I remember I was kinda scared. I thought it was a scary movie. Michael Jackson will never be forgotten. Rest in peace from a loyal fan!
Bull - California Mon, July 20, 2009
Forgot to thank you for a great thread!
Bull - California Mon, July 20, 2009
Hi! I think music imbeds our daily life, weaving its beauty and emotion through our thoughts, activities and memories. With Regards Amrita http://www.webguru-india.com
Amrita - India Mon, July 20, 2009
I found useful article. Thanks for shared.
Sulumits Retsambew - Indonesia Tue, July 21, 2009
I love rock, modern punk and emo type of music. I love
Richard - Melbourne Thu, September 10, 2009
Music is most powerful when it comes from the innermost spirit of the artist.
Ed Crivello - Santa Cruz, Ca Sat, September 19, 2009
My favorite is rock music. Michael Jackson though is my favorite musician :)
John - Los Angeles Tue, November 10, 2009
I love MJ so much !! his songs always be my soundtrack of my life 4ever. Music can bring peace to entire world. Thx for sharing :) kitten wallpaperssena - Malay Tue, December 15, 2009
Life will never be the same with out the greatest legend to ever have walked the earth thus far!!! I will eternally be forever thankful to have been able to have grown up with the KING!!!!!! THANX MIKE.....
keith stew - s.philly PA Tue, September 07, 2010
Almost forgot to say, I still spin vinyl!
http://www.der-hochzeits-dj.ch - Switzerland Mon, October 10, 2011