Looking for some great kid-tested, librarian-approved books for Thanksgiving?  The children's librarians at the Free Library have put together a list of their favorites.  Their comments about some of the books are included below.

One is a Feast for Mouse by Judy Cox

Feast for 10 by Cathryn Falwell - "It's not a Thanksgiving book per se, but the rhyme is terrific and it's about a family preparing a meal, from shopping for ingredients to eating it together."

Setting the Turkeys Free by W. Nikola-Lisa - "Though not a traditional 'Thanksgiving' story it is a highly imaginative adventure story that features turkeys and is a nice addition when doing a Thanksgiving-themed story time. In this fun story, a young boy creates 'handprint' turkeys that come to life and he must protect them. It's a fun read aloud and I always have everyone's attention when I read this one!"

Twas the Night Before Thanksgiving by Dav Pilkey

Thanksgiving Day by Anne Rockwell - "It shows how the Native Americans helped the new settlers and has great illustrations. This is a Native American friendly book that tells the story of the first Thanksgiving via a group of multi-cultural children performing a holiday play. It celebrates the spirit of friendship, sharing and being thankful."

Turk and Runt by Lisa Wheeler

The Little Old Lady Who Was Not Afraid of Anything by Linda Williams - "Interactive with hand motions and sounds! The little old lady runs into pants, shirts, shoes, a hat, gloves and a pumpkin head and puts them all together for a scare (a scarecrow)."

Feeling Thankful by Shelley Rotner and Sheila Kelly - "This is a non-fiction book that depicts pre-school and school-age children recounting the things in their life they are most thankful for."

Pumpkin Circle: The Story of a Garden by George Levenson - "Nonscary book with great pictures about the lifecycle of a pumpkin including the jack-o-lantern stage."

Thanksgiving Day at Our House: Thanksgiving Poems for the Very Young by Nancy White Carlstrom - "I like to intersperse Thanksgiving story times with a few selections from this book.  Can be used with Preschool up to Grade 4 or so."

Thanks a Million by Nikki Grimes - "Mostly for an older audience, but some poems may appeal to a preschool audience."

Of course, story time at the Free Library isn't just about sitting and listening to a great book.  Here are some terrific Thanksgiving songs and rhymes, courtesy of the children's librarians, for kids to sing and recite.  Some of them have actions, too - try them out, if you don't mind acting like a turkey!

Sing “If you’re happy and you know it,” substituting the word “thankful” for “happy.” Instead of shouting “hooray” at the end, shout “thank you!”

The Turkey Dance
(Sung to the tune of "Turkey in the Straw")
Oh, you turkey to the left (two steps to the left)
And you turkey to the right (two steps to the right)
Then you heel and toe (do motion with foot)
And you scratch with all your might. (scratch with foot)
Now you flap your turkey wings (put thumbs in armpits and flap)
While your head goes bobble,bobble. (wobble head)
Turn around and then you say, (turn around)
"Gobble, gobble, gobble!"

Cornbread muffins, chestnut stuffing,
Puddin’ pie, one foot high,
All of us were thinner
Until we came to dinner;
Me oh my! Me oh my!

The Turkey
The turkey is a funny bird.
[Hook thumbs together and spread fingers to create turkey tail.]
Its head goes wobble, wobble.
[Wobble head back and forth.]
And all it knows is just one word:
[Hold up one finger.]
"Gobble, gobble, gobble."
[Make mouth shape with hand, opening and closing it while sounding like a turkey.]

The Turkey II
I'm a turkey, big and fat.
[Spread arms out.]
I spread my tail. I walk like that.
[Fan fingers like a turkey's tail; Waddle.]
Each day's corn I will not miss,
[Rub stomach.]
And when I talk, I sound like this:
[Point to lips; Cup hand next to ear.]
GOBBLE! GOBBLE! GOBBLE!
[Shout.] 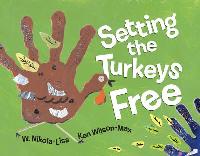 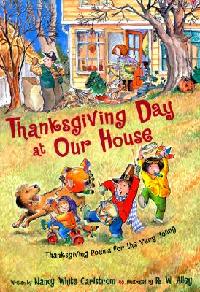 Thanksgiving Day at Our House 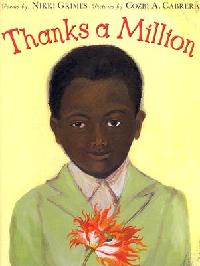 I started my university this year at Georgia, US and first time ever tasted the flavor of thanksgiving and I must say it was wonderful festival. People become so different on this particular day. :) -
Abhinav - Bournemouth, UK Sat, November 28, 2009
These are the books or things that leads to enrich the kids minds in my opinion and in my opinion also to be good at poem one must be start to have interest in young age.
zukario - Singapore Thu, December 17, 2009
I apreciate
yalla - Wed, November 17, 2010
Hi Carolyn, Great post really. Some of those I already knew about but bunch of them are brand new info for me :) Mathew Perry - California Sat, April 09, 2011