Those words were never spoken by the character Sherlock Holmes in the novels by Conan Doyle. But like many wonderful literary characters, they often take on a life of their own. Sherlock Holmes is now part of our popular culture, from his misquoted “Elementary, my dear Watson!” to his noticeable deerstalker hat and smoking pipe.

Back in 2007, the Free Library asked science-fiction icon and novelist William Gibson what his favorite childhood book was; he responded, “a two-volume set of Doyle’s Complete Sherlock Holmes was an early favorite.” (Read the full Take 5 Interview)

And for the real Sherlock Holmes fans, The University of Minnesota released a YouTube video showcasing their collection, home to the largest collection of artifacts related to Sherlock Holmes in the world (watch below).

Now the literary figure is being re-launched on the big screen in a new film called Sherlock Holmes starring Robert Downey, Jr. and Jude Law. But before you rush out to the movie theatres, check out our collection of Sherlock Holmes materials, from novels and DVDs to audio recordings and sheet music! 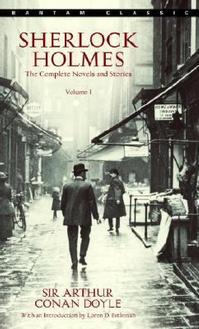 Book cover of Sherlock Holmes: The Complete Novels and Stories by Sir Arthur Conan Doyle
14 Comments | Add a Comment
Wasn't the "Deerstalker" a non-Conan Doyle affectation, too? Seems to me that the actor William Gillette, the first of many to make a name playing Holmes, is responsible for the hat.
Chloe - Philadelphia
Nice post actually my name is sam
Samuel - adelaide
I'm so thrilled to watch the movie. Thankx for the video Camille.
2leep.tk - Irwine CA
Wow, nice stuff for me. Sherlock holmes is a part of my mind to create a solve.
rian - Philipine
I recommend reading a Conan Doyle biography first, which i've and a Clemens autobiography. Roughly the same time period, they overlap. It was interesting to read about Conan Doyle, how he became so caught up in all that scene stuff. And i actually lose interesting about Sherlock Holmes the mainlining cokehead investigator -__-" . In America they had the black cocaine scare of the 1880's, none of this ever mentioned, unless you're really know about history of America. Ahh no, it's funny to remember back at Freud's "cocaine paper".ahaha. - Dare To Fail or
naz - kuala lumpur
Your story connected with this good post is obviously professional and a lot of scholars should use it for their dissertation form. But some people permanently use the aid of the .
KirstenMh26 - US
Holmes also riddles off explanations so rapidly that audiences can hardly pick up on all of what he is saying.
waverly - florida
Neuromancer, Such a great book and I'm a huge fan of William Gibson! -Jeff
Jeff - Seattle
You are making very the hottest contribution connecting with this post! Thence, the writing services or just some writing services, can take as a main ground for the thesis proposal.
LaGwen - US
You are doing very the finest contribution connecting with this good post! Hence, the services and just the services, will utilize as a base for the doctoral thesis.
MK18JESSICA - US
Students that were searching for the knowledge just about from the service could read your good enough topic associated with this topic. Other way, that is possible to utilize the support of the .
ELLIEWE - US
Many books, people and movies are miss quoted no matter even if "Elementary, my dear Watson!" was never said in the books they are a great read for anyone.
David - Philadelphia
Wow. I wish I could go over there and check out the artifacts!
Sawyer - Texas
Thanks for the link! I love Sherlock (and youtube). ---- Brent Allington http://www.abasketcase.com/corporate.html
Brent - Nashville