One Film Kicks Off!

Attention film aficionados! The Free Library’s third annual One Film program officially began last night with a screening of the selected film: Waltz with Bashir. Directed by Ari Folman, Waltz with Bashir evokes the sense of disruption often experienced by soldiers. Folman’s award-winning animated memoir follows his journey into the past to recapture lost memories of his time spent serving in the Israeli Defense Forces during the First Lebanon War. At once jarring and poetic, Waltz with Bashir is characterized by the use of animations and dark humor as the lens through which Folman examines his experience. Waltz with Bashir was nominated for the Best Foreign Language Film at the 2009 Academy Awards and the Palme d’Or at the 2009 Cannes Film Festival—it won the 2009 Golden Globe Award for Best Foreign Language Film.

One Film runs through March 17, and during the program period community members are invited to dozens of free events—screenings, workshops, discussions and panels—and are encouraged to draw connections between Waltz with Bashir and The Complete Persepolis, the featured selection of partner program One Book, One Philadelphia. For a full event calendar and more details on the program, visit freelibrary.org/onefilm.

Have you seen the film already? Leave a comment below and let us know what you thought!

Please note that this film is rated “R” by the Motion Picture Association of America for disturbing images of atrocities, strong violence, brief nudity, and sexual content. 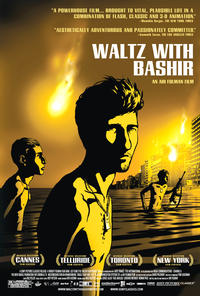