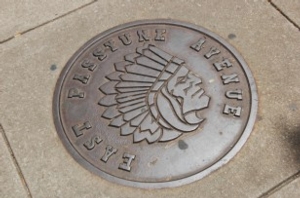 The murder of George Floyd has prompted widespread conversations about racial injustice throughout the country, and Philadelphia is no exception. Philadelphians have taken to the streets to protest the oppression that has dominated our history. One object of focus has been the Christopher Columbus statue in Marconi Plaza. Though now boxed up, it continues to idolize colonization and cultural erasure in South Philadelphia.

Less than a mile away, along the commercial corridor of East Passyunk, a stereotypical image of a Native American in a Western Plains headdress appears on telephone poles, street signs, and manhole covers. This example of cultural appropriation is not a single occurrence. Join us for a discussion examining issues of erasure and gentrification, and their roots in settler colonialism, in this neighborhood.

Touching on the themes of the 2020 One Book, One Philadelphia selection There There by Tommy Orange, this event will feature a change-based conversation with Steve Burton, a member of the Ramapough and the New Jersey Commission on American Indian Affairs; Pastor John Norwood, Nanticoke Lenni-Lenape Judge and former Tribal Councilman and author of We Are Still Here; and Adam Leiter, Executive Director of the East Passyunk Avenue Business Improvement District.

Co-hosted by A Novel Idea on Passyunk

Click here to RSVP for this free online event and receive a Zoom link.