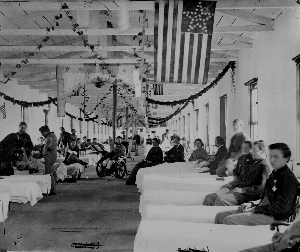 In a compelling multi-media presentation, Carole Adrienne will discuss what she’s learned as the researcher, producer, and writer of “Civil War Medicine: The Documentary,” a 4-part series in production slated to air on PBS.  The series and the presentation will reflect Ms. Adrienne’s years of consulting with experts and delving into primary source material from over 50 American institutions.  Join us for a fascinating glimpse into the medical practices of the period, and of some of the rare, beautiful, and poignant images her work has yielded.

Due in large part to the growing deadliness of the weapons of war in the 19th century and the enormous risks from disease, the casualties of the Civil War were nothing short of catastrophic: of those serving, over 624,000 died and nearly 476,000 were wounded. Ms. Adrienne highlights, though, that in response to these mass casualties, great improvements were made in hospitals and hospital care.  In addition, the war years saw the advent of dedicated, well-organized ambulance services for evacuation of the wounded and dying. Plus, as thousands succumbed on the battlefield, women began entering the healing arts in unprecedented numbers.  These developments would bear fruit long after Appomattox.

Event will be held in the Skyline Room.

7:00 P.M.
Democracy, Democratic Values, and the Recent US Experience