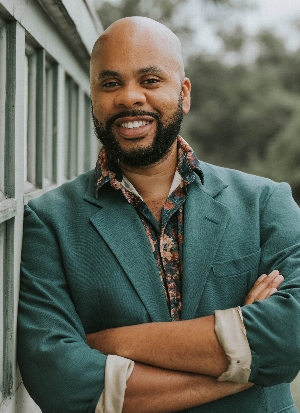 R. Eric Thomas | Here for It: Or, How to Save Your Soul in America

R. Eric Thomas is the creator of Elle’s “Eric Reads the News,” a daily humor column that lambasts pop culture, celebrity, and politics that has been praised by Lin-Manuel Miranda as “Sedaris-level laugh-out-loud funny.” Also a renowned playwright, his work has been staged across America and has garnered a slew of awards, including the Barrymore Award and the Dramatists Guild Lanford Wilson Award. His writing has appeared in the New York Times and the Philadelphia Inquirer, among other periodicals, and he is the longtime host of The Moth StorySlams in Washington, D.C., and Philadelphia. In his debut essay collection, Thomas explores just what it means to be an “other” in the face of college code-switching, the reconciliation of his sexuality with his Christian identity, and the 2016 election.