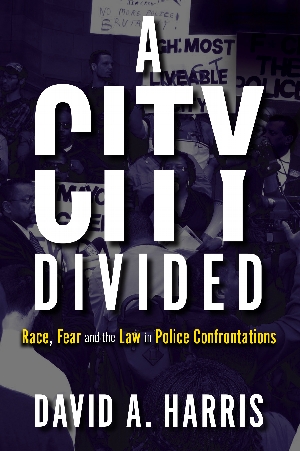 A City Divided: Race, Fear and the Law in Police Confrontations

When an African American high school student walking at night in his neighborhood came face to face with three plain clothes police officers, this chance encounter quickly turned violent.  The young man was injured and arrested, and the case would likely have remained unknown -- until pictures of his battered face hit the media days later. The images shocked Pittsburgh -- but then, just as quickly, the city became divided.  In A City Divided, law professor David A. Harris tells the story -- the charges, investigations, and two trials.  In a case that foretold the fates of so many other black men in Ferguson and beyond, we learn why things when wrong on the street, how the legal system fails, and what we can do to prevent these catastrophes from happening again.

David A. Harris focuses on police, race and criminal justice, and search and seizure law at the University of Pittsburgh , where he is the Sally Ann Semenko Endowed Chair and Professor of Law.  He is the leading national authority on racial profiling, which was the subject of his 2002 book, Profiles in Injustice.  Harris is the host of the Criminal Injustice podcast, and the legal analyst for WESA, Pittsburgh Public Radio.  He is also the recipient of the Jefferson Award for Public Service.  He lives in Pittsburgh

Registration is recommended but not required: https://citydivided.eventbrite.com