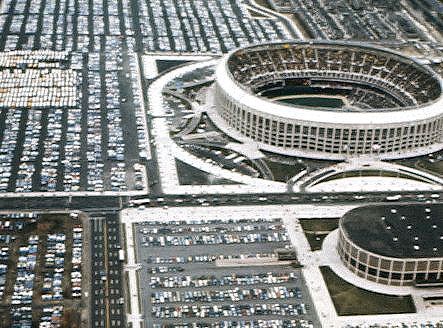 This undated image shows an aerial view of Veterans Stadium and the Spectrum, located at Broad Street & Pattison Avenue.  Built in 1971, to replace Connie Mack Stadium (previously called Shibe Park), Vet Stadium primarily hosted the Philadelphia Phillies and the Philadelphia Eagles games, but also other sports events, concerts, and civic events.  It was demolished in 2004, and the site became a parking lot for its replacement next door, Citizens Bank Park.  The Spectrum was opened in 1967, primarily as a basketball and hockey arena for the Philadelphia 76ers and the Flyers; it was demolished in 2010, and the site is a parking lot for the newer sports complexes.