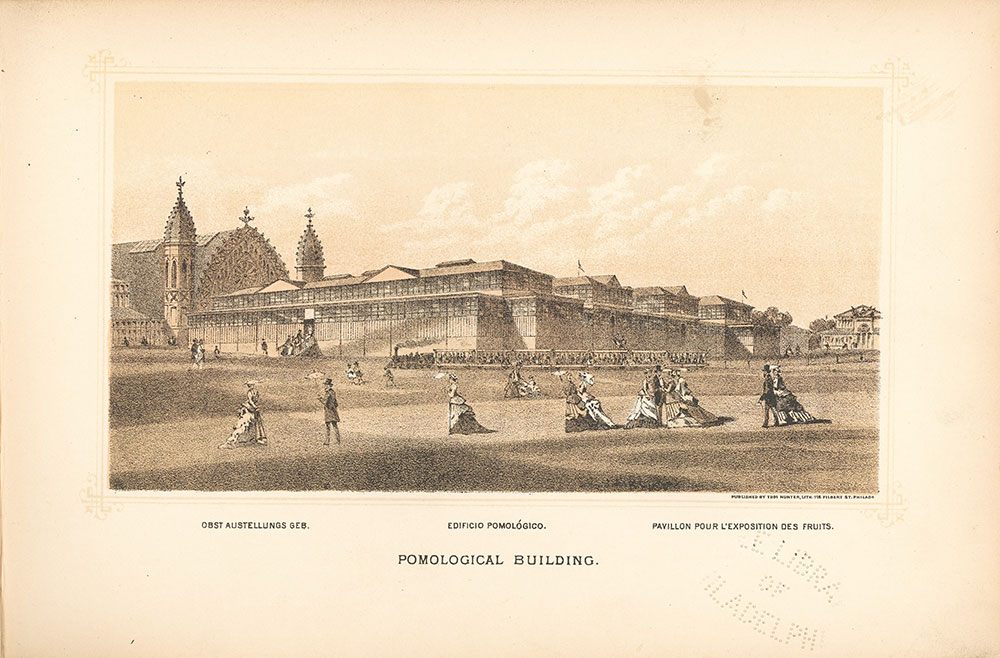 East of the northern section of Agricultural Hall, and south of the Brewer’s Building, stands the annex for the exhibition of fruits. It is one of the many structures upon the ground which is to be used occasionally, and may at various periods during the Exhibition season be entirely empty. It is temporary in its character, and therefore is plainly constructed, without any effort at ornamentation. The attention which has been given to the building is such as will facilitate the principal object for which it was constructed – utility – perfect adaptation to the purpose being the only matter of study. The Pomological Building ranges from east to west, and is in dimensions 180 x 200 feet. The exterior at the east and west ends shows a series of four shed roofs and four gables, between which are aisles extending the whole length of the building from east to west. The walls rise from the ground to within a convenient distance of the roof, from which extend sashes continuous on all sides of the building, which throw in light and can be arranged for ventilation. The main sections peer lantern-like above the aisles, and are also supplied with side-lights, so that the interior is bright and cheerful, and the best opportunities are given for seeing everything which forms the subject of display. There are four main avenues and five aisles extending the full length of the building, intersected by five cross-aisles. In the centre of these passages are placed the tables, four in each row, with tables at the side-rows and ends of the building, making fifty-two without counting the tables around the four sides of the apartment. These tables are made to show fruit to advantage, with shelves in the fashion of truncated pyramids. The roof is supported by plain joists and girders, arranged without display of ornamentation for purposes of utility only. The avenues are about 6 feet in width. Light and air are abundant. The interior is painted white, which renders the appearance of the grand hall cheerful and attractive for the purposes designed. The main entrances are in the centre, on each side, having Gothic doorways. In this building, during the season, will be held at different times exhibitions of fresh American fruits particularly, as they appear when plucked before decay sets in. The programme embraces special exhibitions of strawberries, blackberries, raspberries and other small fruits. The melon, the citron and the cantaloupe will be duly honored. The peach will be displayed in its luscious beauty. In the autumn the pear and the apple, the plum and the grape, will be shown in every variety, fresh and luxuriant. The arrangement will relieve Agricultural Hall from what might be at times an inconvenience; and for the accommodation of visitors or persons disposed to examine for themselves, the Pomological Building has special claims.