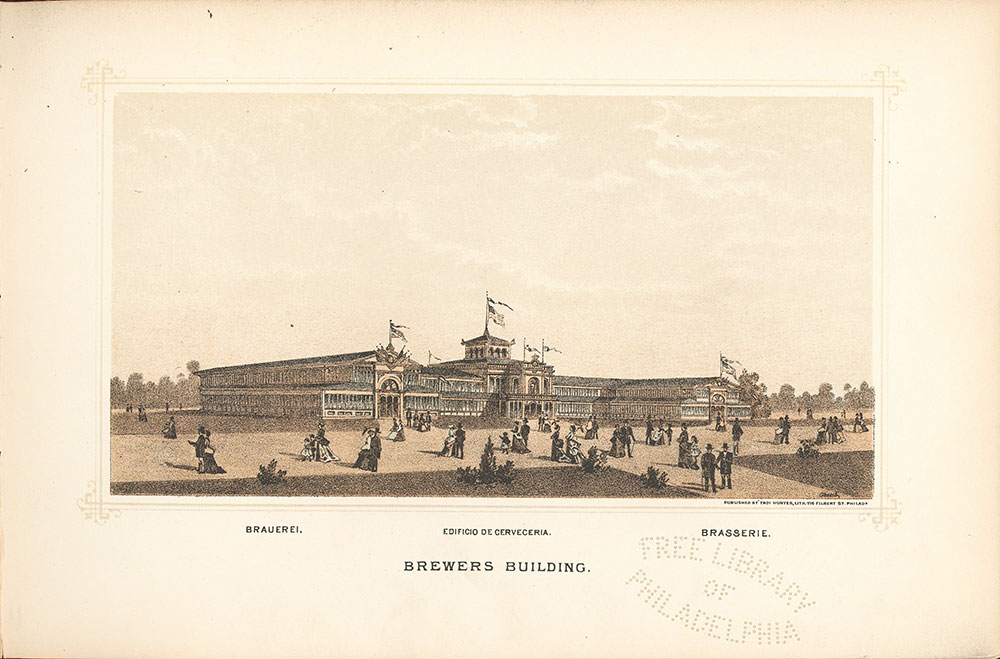 As an annex to Agricultural Hall the brewers of the United States have erected at a cost of $20,000 a special establishment designed to illustrate the mysteries of their ancient art. The building is 96 feet in width by 272 feet in length. It is two stories in height, has a main front which stands out from the centre of the hall and presents a pleasing feature. A square tower rises from the roof and throws light into the interior. The design is plain and substantial, as is consonant with the idea of a brewery – a style of structure toward the decoration of which architectural elegance has not been specially directed. Over the main southern entrance is a large statue of the jolly King Gambrinus, whose memory as the inventor of lager beer is held in high respect by every Teuton. The second roof, at its rise, displays a beer barrel of heroic size, which is decorated with flags of all the nations which indulge in malt liquors, which, in short, may be said to be all the nations of the world. Other entrances bear as trophies the implements of the trade adjunct to the preparation and production of ale, beer and porter. Over the eastern entrance- door, in the interior, is a great trophy, in the centre of which is a medallion which bears this inscription:

This is a practical way of presenting concise facts which show the prodigious growth of the business. Upon the walls of the interior, conspicuously displayed, are inscriptions in English and German, embodying sentiments appropriate to the trade. The centre room is to the roof 85 feet high. There are four other rooms, each 45 feet to the top. Adjacent is an ice-house, with separate compartments for ale and beer, regulated according to necessity of temperature, and a testing- room. It is in the interior that the Brewers’ Building expects to present the most interesting subjects to the visitor. Even in the brew-house it is possible to be historical; and the brewers offer to the attention of their guests a model of the brew-house of a hundred years ago, which differed very little from the brew-house of a century earlier, and which is contrasted with the brewery of the present day. One may learn here how William Penn, who was no total abstinence man, but was much interested in the brewery and the vineyard, built his brew-house at his manor of Pennsbury about 1683. In those days they had time, the grain being plentiful and the demand limited, to patiently prepare a good beverage. But at this era the great demand for malt liquors makes it necessary for the brewer to hurry up his product. The design of this establishment is to show how by improved processes and machinery the art of brewing can be accelerated with perfect honesty without the necessity of adulteration, so as to produce a pure liquor. Samples of the finest ales, beer, porter and brown stout made in this country and Europe are also shown, and the result is general gratification to visitors. Builder, James B. Doyle.