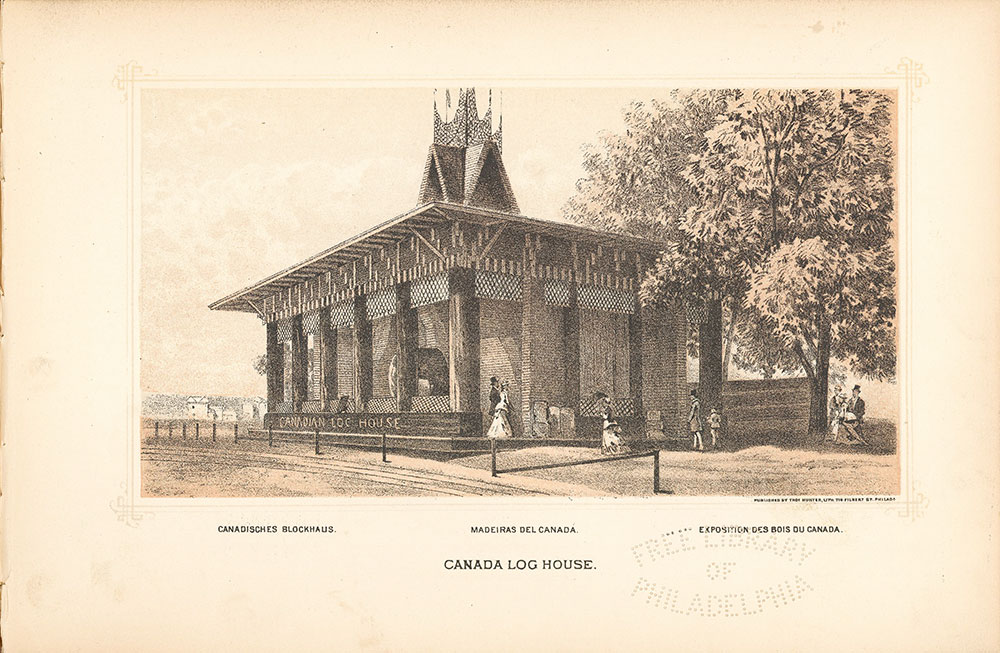 Writers upon the theory of architecture who are ambitious to go back to the very beginning, say that men were taught the art of building by observing the operations of Nature. Thus, from the cave, supposed to be the earliest dwelling-place after our parents were driven from Eden, came, it is said, the Egyptian styles which commenced with entrances to caves and extended to buildings above ground, fashioned after the first forms. The forest, with its stately trunks of trees, suggested the Grecian colonnade; the branches which met overhead in the deep recesses of the woods are said to have given to mankind the idea of the Gothic arch. Whoever is disposed to follow out this fanciful philosophy will find it illustrated in the Canadian Log House, so called. The magnificent portico of the Parthenon may be imagined to have been the perfection of an arrangement of trunks of trees like that which forms the exterior of this fabric. All that is necessary is to extend the size of the building, substitute for the huge trunks with the natural bark upon them which form the colonnade, stone for wood, and patient workmanship and carving, and the idea is completely realized. There are few who would discover the exercise of aesthetic beauty in a lumber-yard, or imagine that, by the piling up of rough boards and taste in the arrangement, something like a structure might be made which would attract general attention; and yet the Canadian Log House is scarcely more than a timber display. The material, except in the portico, is composed of the same sort of boards as may be used in any structure or article which is ordinarily made of wood. The boards are piled as they are while undergoing the process of seasoning, each plank being separated from its neighbor by small blocks, between which is ensured the necessary circulation of air for the drying of the timber. It is the manner in which the wood is arranged that makes of this mere board-pile a structure unique and attractive to the spectator. Six pillars, which are trunks of huge trees, are upon the east and west sides, and on the north and south two extra pillars of the same character make with the corner columns a portico of four. These fine specimens of the Canadian forest are not decorated with capitals, but between them a light lattice-work extends, which relieves the eye and draws attention from the unfinished character of the upper portion of the column. The pillars support a roof of rough planks laid upon each other, in the centre of which rises, by an arrangement of boards piled on boards, a cupola Gothic in style, surmounted by a flagstaff displaying a flag. In the interior two finished columns of ash help to support the roof. Loose boards piled in such manner as to open a doorway from side to side make also a stairway leading to the cupola. The principal trophy of the building is a section of white pine cut from a 38-feet log taken from a tree which was 303 feet in height. The inscription on it avers that the tree was 664 years old when taken down. This is, of course, a matter of estimate assumed by counting the rings in the wood. At all events, the tree must have been very old, as the diameter of the trunk is at least 8 feet. Various specimens of Canadian woods are arranged in other parts of this rude temple, showing abundance of forest wealth in the Dominion, and rendering a solution of the building problem easy. The size of the house is about 60 x 40 feet, and it is situate south-east of the British buildings and nearly adjoining to them.