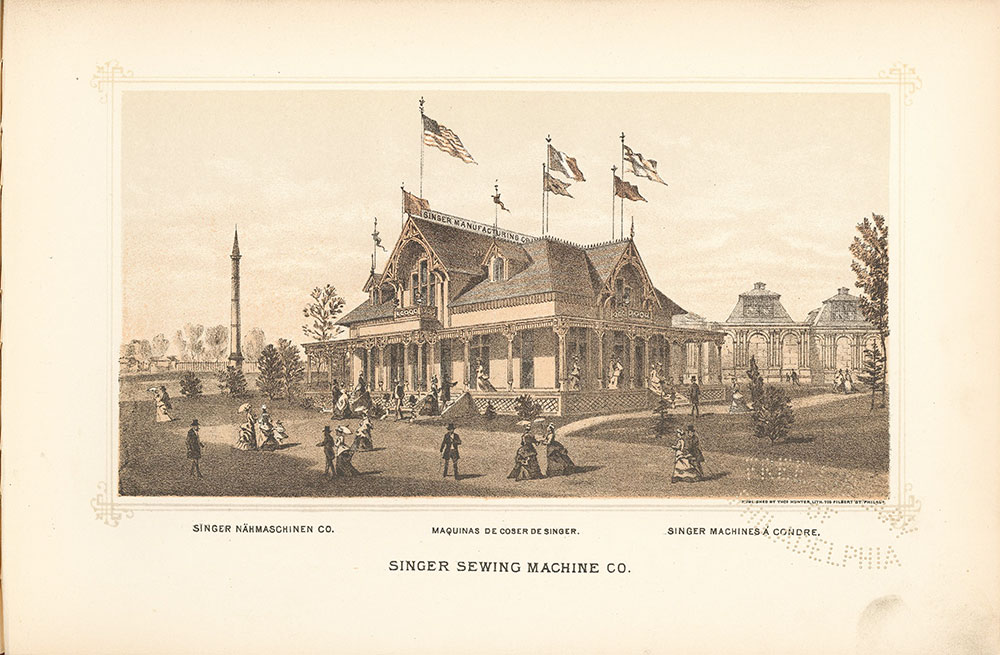 The time is fully within the memory of Americans of the present generation who will not confess themselves old when the invention of the sewing-machine was spoken of as a novelty which never could be made valuable, or which, if such should happen to be the case, would cause deplorable results in the distress and injury of all the sewing-women in the land. Scarcely thirty years have elapsed since Elias Howe obtained his first patent. Some years passed by before the machine elicited much favor, but latterly its success in various forms has been enormous. The Singer Manufacturing Co. has invested a large capital in the manufacture of machines upon the patents in their possession, and they have at their headquarters in the Centennial grounds the two millionth machine of their making, which they design disposing of when the Exhibition closes, by lot, to be awarded to some fortunate lady who may visit them in the mean while. The Singer building is situate upon Lansdowne drive, north-west of the Art Building annex, and occupies a pleasant situation overlooking Lansdowne Glen. It is in the Gothic cottage style, oblong in shape, the dimensions being 56 x 81 feet. Highly ornamented gables rise in the centre of the north, south, east and west sides. They are topped off with handsome finials, and the open timber-work and decorations are in fine style. Their pitched roofs join Mansard pavilion roofs at the angles of the house. Each of these corner additions receives light from a single dormer-window opening into the second story rooms. A handsome portico surrounds the building. It is broad, comfortable and shady. The roof, of slate, is gayly ornamented in colors. The upper portion of the cottage is decorated with flagstaffs at every available point. There are twelve of them, which display the colors of the principal nations of the world. The ladies’ parlor is at the south-west portion of the cottage, and is richly furnished, the wall decorations being elegant pictures in tapestry worked by the Singer sewing-machine. There are offices adjoining. The main exhibition-room is on the east, and occupies the entire depth of the building on that side. In handsome cases are exhibited specimens of sewing-machine workmanship upon shoes, saddles, harness, clothing and embroidery. There are 61 sewing-machines in full operation in this apartment during exhibition hours, no two of which are alike in appearance or in details of machinery. Among the curious apparatus here exhibited are machines for sewing wax thread, making buttonholes and eyelets, and binding books. Three wax figures representing magnificent women, one being a lifelike representation of the princess of Wales, are in the show-cases. The dresses are elaborate and costly, in the richest styles, showing varieties of sewing, pleating, ruffling and embroidering, including a magnificent costume rich in gold bullion embroidery, which garment is estimated as worth $8000. The architect of this building was James Vandyke, of Elizabeth, New Jersey. The work was done entirely by employés of the Singer Manufacturing Co. Cost, $20,000.