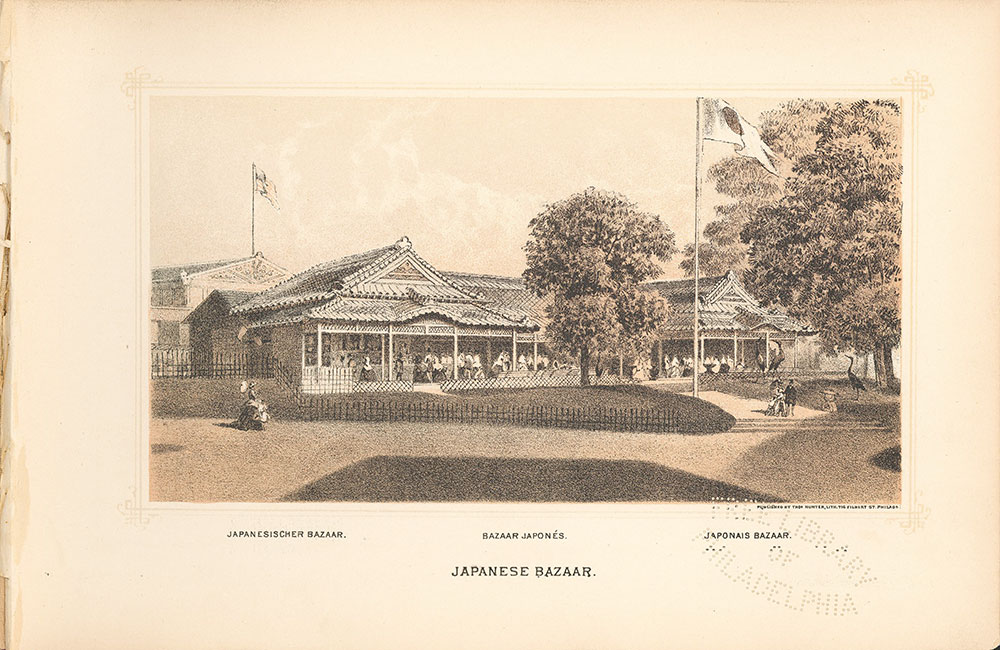 The Japanese are certainly the Yankees of the Asiatic continent. There is utility in their arrangements and a wide-awake appreciation of the demands of business which show thrift and thorough mercantile ability. Anticipating the curiosity which attends their movements among all the visitors of the Exhibition, they resolved to make the most of the opportunity and turn American inquisitiveness to their own advantage. The Japanese Bazaar is simply a shop, furnished with goods likely to attract purchasers and wisely restricted to commodities which, compared with the elaborate articles in the Japanese sections of the Main Building, are cheap. The Bazaar is situated north of the House of Public Comfort, and opening eastward faces the Swedish School-house. The building was erected by the artisans who put up the Japanese dwelling. It is not so fine a piece of workmanship as the latter; but considering the object for which it is intended, it must be pronounced in appearance and finish superior to most of the temporary structures erected on the grounds. The main building shows a broad centre with quadrangular wings at the ends, and the width is about 125 feet. The depth is probably forty feet, and there is a storage annex adjoining. The interior may be said to be a series of counters, shelves and tables, open to the air and light, protected only by the roof. The latter is in the usual Japanese style, covered with black tiles, those at the edges being painted white. The principal roof overhangs what might be called a shed roof, and the latter, in the centre of the main building and at each of the wings, is decorated with pediments grotesque in shape, and not kept in order by the severe attention to maintaining straight lines which is seen in American architecture. The little piece of ground which surrounds this building has been enclosed and fixed up in Japanese garden style. The flower-beds are laid out neatly and fenced in with bamboo. Screens of matting and of dried grass divide the parterres. There is a fountain guiltless of jet d’eau from which the water trickles. At the southern entrance a queer-shaped urn of granite on a pedestal, shows marks of great age, being weather-worn and dilapidated. It must have done garden service years before Perry opened Japan to the Western nations, and it was carved by Niphonese who had never seen a foreigner, and who never could have expected that their work would be transported thousands of miles to be inspected by millions of strangers. The garden statuary is peculiar. Bronze figures of storks 6 to 9 feet high stand in groups at certain places, and a few bronze pigs are disposed in easy comfort in shady places. The shelves and tables of the Bazaar are loaded with curious goods, in the preparation of which these industrious people excel. There are bronzes of all sorts and designs, china-ware, tea-services and unique ceramic articles odd in appearance, and some devoted to strange uses. Of the gilded and varnished articles known as japanned ware there is great variety, and there are numerous knickknacks and curiosities of all sorts which the Japanese merchants are anxious to dispose of, and are ready to barter for greenbacks.